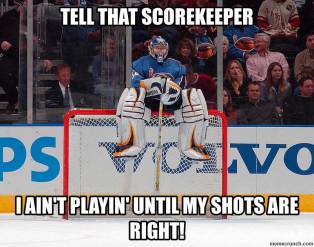 Our goalie, aka ‘The-Youngest” just rolled his eyes at me.

Yesterday, we left off with our hero, (yes me), acting less heroically, desperately trying to figure out how to work the hockey rink’s time machine.

So far, the game was about to start and all I’d managed to do was set the clock to the wrong time.

I waved for one of the refs to come over (I looked like I was trying to land a plane or something), and the ref who came over had no idea how the time machine thingee worked. So, terror creeping into my voice, I asked, as politely as I could, would there be another ref who would know about this machine?

As he went to see, I reset the time machine, (sadly not a real time-machine because if it was, I would have reset it to before Carter took up hockey and I locked him in the basement so he couldn’t sign up.) Then, I tried to set the clock again, but by now, jeez, how much time should it be for? 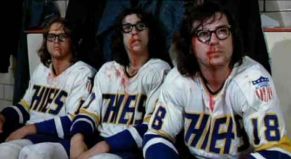 Our team might get more penalties than the Hanson brothers

Another ref came over and took me through the steps. Thankfully, I got the setting of the time clock down, and then he tried to show me how to set penalties, (and with our team, this was something I really, really, really needed to know.)

Meanwhile, beside me, we got a phone from another parent that could load up the scorekeeping app, and the dad was busy getting instructions on how to use it.

The ref showed me how to do the penalties, but when he tried to show me how to override the defaults (which were 2 min penalties), to create 4 min penalties (and this, too, would be something I would HAVE to know due to how our team plays), he got confused, like me, and couldn’t figure out what he’d done wrong.

And for me to do so, meant it would mean reading the instructions as I did it.

Had anyone been watching as I learned all this, it would have been like watching someone in slow motion.

I began by putting my face so close to the time-machine that I could lick the buttons, then I stared at it until I found the hometeam part of the ‘hometeam’ button group, yup, got that, then find the penalty button, not that one, but the other one that says player and penalty, then hit that one, yes, that one, then hit enter, which is that button in grey over there, right, got that, then enter the players number, but remember it has to be two digits, so if it’s #2, then it’s 02, then hit, ah enter? Yes. Enter, again, then, yes, it loads up the automatic 2 min penalty, good, then, ah, hold on, yes, hit enter, again and wait, it’s up on the board!

Now, to make it a 4 min penalty means hitting another 4 buttons, an arrow key and do a certain amount of swearing, at least that’s what the ref did, so I prayed that none of our team would get majors this time around.

Finally, it was time to start the game. This I realized, (since I’d never gotten around to properly setting the practice time in time) because the ref blew his whistle and both teams went to their bench. I set the time clock for 15 min, as dictated by the ref, and hovered my finger over the start button.

I won’t lie, by now, my finger was shaking.

The puck dropped and I started the clock.

“It’s all easy from here,” the other dad said, smiling, and I laughed like the Joker in that Joker movie about the Joker.

But he wasn’t wrong. Ok, sure I wasn’t super fast at putting up the 100 penalties our team got, but they got up without an error. Ok, sure, I may have forgotten to hit the start button for 3 seconds while I stared off into space and thought of Maui. Ok, sure, I looked like someone taking a final exam to get into Harvard after a long, long night of drinking, but hey, it was all fine.

The logical part of my brain said, see, nothing to worry about, you got this.

The phobia part of my brain said, you need a drink. And a nap.

But, I survived that experience, learned from it in some way that’ll hit me in a couple of weeks after I’m released from the mental health unit, and felt vaguely proud of myself for not running off to Mexico. I mean, hey, I’d done my parenting duty, had a laugh or two with the other dad (who definitely got the raw part of our deal), and did something that terrified me, like any good adult.

I count this as a dad-win.

Aquarius. Traveler. Gamer. Writer. A New Parent. 4 of these things are easy. One is not. But the journey is that much better for the new people in my life. A life I want to share with others, to help them, maybe, to make them feel less alone, sure, to connect with the greater world, absolutely.
View all posts by Joe Cummings →
This entry was posted in Hockey Life, Parenting and tagged apps, arachnophobia, bantam, fear, hockey, humor, langley, Minor Hockey, old age, parenting, phobia, phobias, scorekeeping, spiders, step-dad, stepdaddy, stepdaddying, timekeeping. Bookmark the permalink.