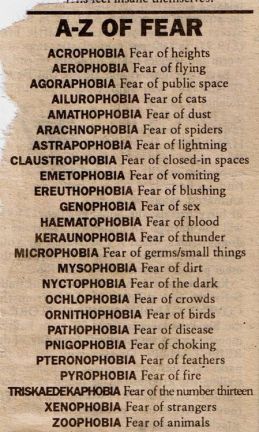 Oh, there are all sorts of phobias.

Are you afraid of anything that’s kind of irrational? Me, I want to deal with one of my phobias.

Like all good phobias, it’s not logical, (except arachnophobia, which is completely understandable because it’s a fear of freaking spiders with their spooky eyes and ability to leap into your hair from 20’ away.)

But the fear I had to deal with yesterday was the fear of hockey timekeeping.

At its core, it’s either a fear of looking like a complete moron or a fear of new stuff (or a combination of the two). Being old, or at least older, looking like a moron is part of the deal, (I deal with that one a regular basis), but learning new stuff is hard and stressful. I don’t quite understand why my 13-year-old can reprogram our remote to speak to aliens on a distant planet, and I can’t figure out how I set the closed-captioning to Bulgarian.

The logical side of me (I want to say it’s right next to the part of my brain that says I need coffee every morning), well that side said, “Why worry?”

Worst case, you bugger something up and it has to get fixed. Like, say, you put 20 min for a penalty instead of 2, then the refs will come over and sort it all out, probably rolling their eyes at the old guy, but it would get sorted out, and hey, I’d not be the first one to bugger something up – one dad couldn’t figure out how to turn off the horn last game, so I just needed to chill out, right, chill out.

The phobia side of my brain, (I want to say it’s right beside the part of my brain that says it’s a bad idea to stuff lego up your nose or zap yourself with an electric fly swatter), well, that side said, “Run, dude, run, no one can make you do sh*t you don’t want to do if you’re in Mexico.”

However, somewhere in between those two brain parts is the Adult-Joe that says no matter the fear, you’re an adult so just f*cking do it. 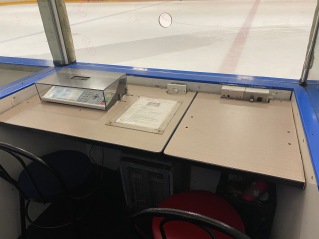 So, on the day I had to do my duty, I raced over to the booth as soon as the timekeeping area was vacated by the previous parents, sat down, took a deep breath and read the instructions.

Those buttonie instructions could be followed, but I needed to sort out the one thing I didn’t get, which was how to reset the machine from the previous game.

Luckily I was able to find one of the super-amazing-parents who seems to know everything about everything, so I bugged her, asking her to give me a 5-second tutorial. As I did, the dad who was responsible for the scorekeeping (that is to say, the actual writing down of who scored and when and who assisted and stuff like that,) came up.

The poor dad tasked with that job needed help as well, and maybe more than me. First off, he needed a phone, needed to download an app (because those things are not done on paper anymore), and well, that app wouldn’t load up, and we couldn’t sign in, even after we tried time and time, again.

Suddenly, I was thinking I got the better deal, but honestly, at this point, at least one of us (me!) was starting to panic.

And time was ticking away (though there was no official timekeeper), so we went to the rink, sat in our booth, and hoped we’d get things sorted out. The super-amazing-parent got me to reboot the machine, and I brilliantly set the practice time to 50 seconds instead of 5 min. The-Youngest, now on the ice, looked over to me and shook his head in shame. 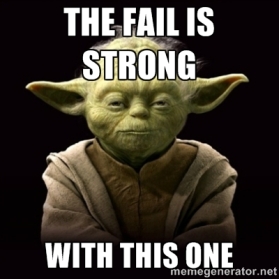 Oh, Yoda, you know me

Yes, this was turning out exactly like my nightmares, only at least in real life, I was wearing pants and not being chased by a clown with spider eyes!

Aquarius. Traveler. Gamer. Writer. A New Parent. 4 of these things are easy. One is not. But the journey is that much better for the new people in my life. A life I want to share with others, to help them, maybe, to make them feel less alone, sure, to connect with the greater world, absolutely.
View all posts by Joe Cummings →
This entry was posted in Parenting and tagged apps, arachnophobia, bantam, fear, hockey, humor, langley, Minor Hockey, old age, parenting, phobia, phobias, scorekeeping, spiders, step-dad, stepdaddy, stepdaddying, timekeeping. Bookmark the permalink.