Getting It Right For The-Oldest – Epcot – Vacation Day 5 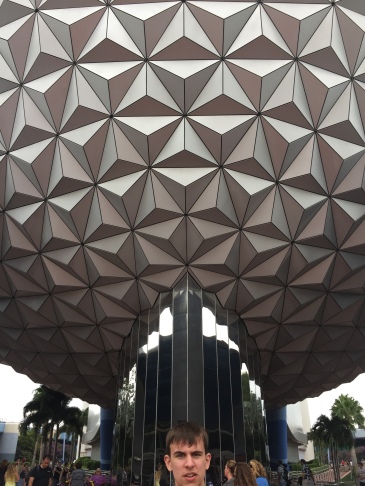 The-Oldest with the Spaceship Earth growing out of his head.

Getting it right for The-Oldest is NOT easy.

He was an amazing sport, though, and went on all the terrifying rides with his brother, even enjoying a few, but there was nothing super special about the trip until the Biergarten in Epcot.

No, he didn’t have a beer, again, but it did have an oompah-pah band.

And a buffet where he could choose what to eat. 100% his choice. No potatoes he didn’t like. No gravy that someone poured onto something that shouldn’t have gravy (like peas). No spices cooked into the pasta sauce or meat flavoured with too much flavour.

Instead, he could have a plate full of wieners if he wanted. With a side of peas kept very separate from the wieners. And buns. Lots of buns. With butter.

Plus, while he ate, he could listen to Oktoberfest music (and dance if he wanted to, but that was as likely as me wanting to sing naked in front of my high school French teacher while dancing on a red-hot grill.) The music, I have to say, was fantastic, but stopped us from talking (which was also a HUGE plus for The-Oldest.)

Now THIS was The-Oldest’s idea of fun.

There is a video here.

Literally dripping wet, we all had a great time. I ate so much food, I think I gained 40lbs before I left the restaurant. Think Mr. Creosote from Monty Python’s Meaning of Life. But then, I LOVE German food. Sauces. Sauerbraten.  Spätzle. Strudel. Red cabbage. I think in a former life, I was German. Or at least starving.

With darkness falling and the rain letting up, we decided to stay for the fireworks and what a great decision that was. The-Oldest had the best reason why this is the BEST fireworks in Disney World (and that will be a part of his Top 10 list coming soon), but from my perspective, nothing beats a good fireworks show.

I don’t know why. I’m like a little kid seeing a puppy for the first time. If there is a heaven, mine will be filled with fireworks. And German food.

For some reason, it didn’t rain at all as we watched the sky explode around us, as the crowd oooh’d and aaah’d, as the air filled with the smell of explosives.

A great picture of a great day!

Everything had simply come together for this evening to make his adventure amazing.

Despite the rain, we got to ride on the Test Track.

Because of the rain, we went inside to a sitdown restaurant where The-Oldest had his best experience.

With no rain, we got to enjoy an incredible fireworks show.

I couldn’t wait to see what the next day would bring, not knowing at the time that I would get to experience one of my real-life nightmares.

Aquarius. Traveler. Gamer. Writer. A New Parent. 4 of these things are easy. One is not. But the journey is that much better for the new people in my life. A life I want to share with others, to help them, maybe, to make them feel less alone, sure, to connect with the greater world, absolutely.
View all posts by Joe Cummings →
This entry was posted in Disney And Universal 2019, Travel, Traveling with kids and tagged avatar flight of passage, blizzard beach, car person, cars, clock, Disney, Disney waterparks, Disney World, epcot, germans, germany, lazy river, lightning, prettiest girl in the world, rain, sci-fi, spaceship earth, step-dad, stepdad, stepdaddying, stepparent, telling time, test track, the boyz, the oldest, the prettiest-girl-in-the-world, the youngest, themepark, thunder, thunder and lighning, vacation, waterpark, waterslides, wave pool. Bookmark the permalink.