Is the Hoover Dam the 8th wonder of the world? 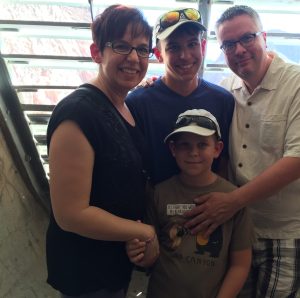 Inside one of the tunnels in the Hoover Dam

Like the Grand Canyon, the Hoover Dam is really a MUST-SEE if you’re in the area. Oddly enough, I’ve been to Vegas 3 times and not seen the dam once. So much for a MUST-SEE, right?

But I made a mistake those other times. It really is something you shouldn’t miss.

We made it just in time for the last tour. It was one of those days where everything just seemed to work out. Even the tour guides were surprised that we bought our tickets only 15 min before the tour started. They said people usually have to get tickets at 10am and wait.

Each section of concrete was marked on the Hoover Dam so the workers or supervisors could identify a specific area.

Our tour guide took us through the dam itself, a fantastic experience, and the generator room. We got to see where the workers did math on the walls, how the lights were sunk into cavities in the tunnel roof so no one would smash them or bonk their heads, and how the engineers would check if the dam shifted in any way.

The turbines and giant crane inside the generator room of the Hoover Dam.

We got to see the immense crane used for moving the generator parts around, feel the wood-grain texture of the concrete in the tunnels, hear the low engine-like roar of the water as it passed above us in the first room of our tour.

I loved it. Loved. It. I love seeing how things are made. Electricity. Movies. Beer. Babies. Whatever. It’s all fascinating.

But instead of 10 blogs about why the Hoover Dam is amazing, here is a top 10 list.

The Allspark was kept hidden from us at the Hoover Dam which made The-Youngest sad.

1) You get to see where the Transformers hid the all-spark. Or where Megatron was hidden. I can’t remember which. The actual room is not on the tour, however, it’s kind of

The actual room is not on the tour, however, it’s kind of secret so it’s somewhere behind that big ass wall they show you in the generator room. I think.

2) The dam was built AHEAD of schedule. Have you ever heard of anything like that? It must have happened somewhere, sometime in my life, but I’m hard pressed to remember an example.

3) Provided jobs for 20,000 workers during the depression and the workers were paid $4-$6/hr, worked 8 hours a day, with 2 days off a year. Hard core work, too. Not writing, work. Manly, man work. With Concrete. In a million-degree heat.

Marble? In a dam? That;s one of the surprising things about the Hoover Dam 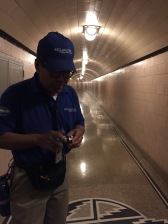 Our guide at the Hoover Dam just before he nominated The-Youngest to be his assistant guide. Seems guides like to borrow The-Youngest for some reason. We need to start charging

4) The workers were paid to actually make the dam look good. I mean, who does that these days? They used wooden slates on the concrete in the interior of the dam to create a wood-grain look to the concrete. They used marble on the floor inside, for goodness sake. And proceline tiles on the tunnels. You have to see it to believe it, but they built the dam with the idea that it would be a tourist attraction from day 1.

5) A whole town had to get built to support the workers. Boulder City. I know it sounds like a Flintstone location where Fred and Barney worked, but it’s a cool name. Personally, I would have gone with Dam City, but whatever. 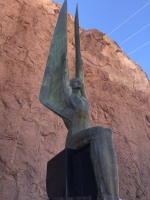 7) If you love art deco, and I  do, like I love gargoyles on churches and stained glass in windows, then you HAVE to see the Hoover Dam. Look at the bathrooms, at the elevators, at the statues outside and even the parking lot… all beautiful examples of the style.

8) The dam could not be built today. Can you image the environmental nutbags who would line up to protest, the massive mountains of governmental paperwork that would have to be fought through, the years of studies that would have to be done and the country-crippling expense? The US is simply not a country capable of such great things. Look to China. 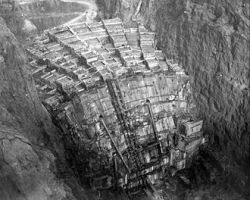 Coolest picture of the Hoover Dam ever. 3,250,000 cubic yards of concrete

9) Lots of fun concrete and building facts to learn, but my favourite was how they solved the problem of setting the concrete. See, it would take, like 100 years to cure and when it finally cured, it would crack and that’s kinda like a bad thing for a dam to do.

So, they built a huge fridge and placed ‘582 miles of one-inch steel pipe throughout the concrete, pipe that carried river water and ice water to cool down the concrete.’ Thus allowing the concrete to cure.

10) You get to say things like dam line-up, I’m waiting for the dam guide, I’m on the dam. It never gets old, and there are a billion permutations.

For more facts, check these links. 8th Wonder, History Channel which has some really cool stuff, and this from mental floss which has EVEN MORE fun facts.

Now there was only Vegas to see and do.

We had plans, but as usual, some of the best adventures came from what was not planned.

Aquarius. Traveler. Gamer. Writer. A New Parent. 4 of these things are easy. One is not. But the journey is that much better for the new people in my life. A life I want to share with others, to help them, maybe, to make them feel less alone, sure, to connect with the greater world, absolutely.
View all posts by Joe Cummings →
This entry was posted in Parenting and tagged 8th wonder, allspark, art deco, boulder city, concrete, dam, history channel, hoover dam, humor, humour, megatron, mental floss, Nevada, parenting, prettiest girl in the world, step-dad, stepdad, stepdaddy, stepdaddying, the oldest, the prettiest-girl-in-the-world, The Rock, the youngest, transformers, Traveling with children, Traveling with kids, vegas. Bookmark the permalink.