Can you make a road trip fun? Or does fun just happen sometimes?

We had just three things to accomplish. Drive to Vegas. Stop and see the amazing Hoover Dam along the way, and see what The-Youngest called the MUST-SEE place half way to the dam.

All three things offered something new, something unexpected, something, kinda awesome.

What would The-Youngest’s MUST-SEE place be? Uncle Jeb’s Monster Trucks, Guns and Liquor? The location of the Cars movie? A tumbleweed race-course?

See, they don’t have a Timmies down there. At least down in Arizona. The Americans have DD. And The-Youngest was convinced it would be the best place to find a good donut (based on his research of donuts.)

It made sense. There was a Dunkin Donuts half way to Vegas and, this time, we had no elusion that we could do the 4-hour drive without several rest stops. Plus, I wouldn’t mind a good donut as well. And something akin to a double-double.

So let me tell you about the drive. It’s a boring drive. However, cool note, there are a billion Mustangs on the road. It is, by far, the muscle car of choice. Sorry Charger. Sorry Camaro. It’s actually crazy how many there are. On the drive TO Flagstaff, I started pointing them out, but after about 20 within 30 minutes, The-Oldest begged me to stop.

It was the same on the way back. You couldn’t toss a cup of coffee out the window without hitting someone speeding by us in a ‘stang. Personally, I would have bet on some form of truck being the most popular car in this neck of the woods. Gun rack. Confederate flag. Deer antlers on the hood, But no. Young, old, short, tall, man or woman, they all seemed to choose the Mustang.

Also of note was the fact there aren’t any rest-stops like the ones we have in Canada and the Pacific North West. No place to pull over and let the children out to pee. Those places in this part of the world are called gas stations.

We never found Radiator Springs. That’s more like Peach Springs on Arizona State Route 66, but we did see a lot of similar geography.

Now, for The-Prettiest-Girl-in-the-World, the best part was seeing a real-life tumbleweed tumble across the highway and back into the desert. No Roadrunner this time, though. And she was excited to see a lot of the terrain depicted in Disney’s Cars, a movie she watched over 200 times with her young boys.

For The-Oldest, he was happy that we listened to classical music the entire drive. He got to explain who wrote it, why it was awesome and how he would change it to make it more awesome. He had no idea what awaited him at the Dunkin Donuts. Not a clue.

And The-Youngest was happy just to discuss the possibility of donut selection. Would there be a double chocolate donut? One with sprinkles? One with chocolate AND sprinkles? Maybe there’d be an arcade there. And wifi. And a place he could buy cheap headphones. When he grew bored of that, he tried to yank one of his loose teeth out of his head, grossing his brother and mom out.

At the Dunkin Donuts, The-Youngest had his dream come true. A double-chocolate donut WITH freaking sprinkles. I got to have my double-double (and the same donut as The-Youngest), while The-Prettiest-Girl-in-the-world chose a healthier black coffee, and The-Oldest was satisfied with milk and Wifi.

But while he was looking intently at his phone, two girls came in. Same age as him, as near as I can tell these things, and they totally checked him out.

I wanted to jab him and point out what was happening, but that might have been embarrassing for him, so I let him be. But there was no mistaking what the girls did. They huddled close to each other, shot looks over at him, giggled, tried to catch his eye while trying to look like they weren’t interested at all, and played with their hair, smiling in his direction a lot. 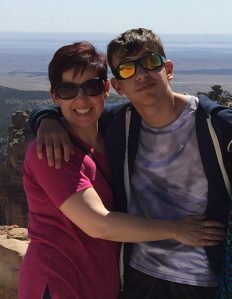 It made me realize what a transformation The-Oldest has gone through this year. Ok, he’s still largely oblivious to girls, but he’s become quite the handsome boy. Tall and lean. Big brown eyes. Great smile. You can see it in some of the Grand Canyon pictures. You can see the man he’s becoming. (FYI – it makes The-Prettiest-Girl-in-the-World cry.)

Sadly, he saw nothing of the attention he received. He later explained he was too busy composing in his head, but wasn’t uninterested in hearing that girls might find him, you know, attractive.

Equally sadly, The-Youngest didn’t find his headphones and we weren’t going to let him eat 12 donuts, so for him, he was happy to get on the road, again.

I wondered as we drove off, though, a few years from now, what would The-Oldest have done? Smiled back? Simply ignored them? Gone over and talked to them about Beethoven?

Who knows? That’s the amazing part of watching these boys grow up, deal with how their world changes, how they change, and how what’s important changes.

How lucky am I to be there with them? Maybe to help them along the way. Maybe to be there to support their choices. Their decisions. Maybe to offer sage advice that will likely be completely ignored.

But for today, just being there with them, on something as simplistic as a car ride, made this adventure a thousand times better. And we hadn’t even reached the dam, yet.

Aquarius. Traveler. Gamer. Writer. A New Parent. 4 of these things are easy. One is not. But the journey is that much better for the new people in my life. A life I want to share with others, to help them, maybe, to make them feel less alone, sure, to connect with the greater world, absolutely.
View all posts by Joe Cummings →
This entry was posted in Parenting, Vegas and Grand Canyon and tagged arizona, camaro, cars, charger, Disney, disney movie cars, driving, dunkin donuts, flagstaff, humor, humour, mustang, Nevada, parenting, prettiest girl in the world, radiator springs, roads, route 66, step-dad, stepdad, stepdaddy, stepdaddying, the oldest, the prettiest-girl-in-the-world, the youngest, Traveling with children, vegas. Bookmark the permalink.