Not knowing what to expect at supper, I could only imagine the worst. 70 kids with food. Yikes.

But the camp had long ago figured out how best to manage suppers. One cabin was assigned serving and clean-up duty. That meant a cabin set the table, brought food to the table, got second helpings for the table when they needed them, then cleaned up afterwards.

So NOT how it happened. No, please, sir, could I have some more.

The genius of this system was that you just know 69 of the 70 kids will want more. They’ll have had a busy, active day and will need refueling. So having them all stomp up to the front to get more food would be a nightmare. Also, getting volunteers to clean up afterwards might be like getting politicians to release their expenses.

Our cabin was up first. We all took our jobs surprisingly seriously. In fact, I later learned we had the perfect crew. One kid loved to make sure everyone had everything. 8 plates, 8 forks, 8 knives, 8 glasses. One ran around to make sure all the tables had napkins and condiments. One was super careful with the food. And the rest took directions well. Like me.

Then 70 odd kids poured in.

It wasn’t just the kids who served, it was also the adults. AKA: me. I could barely keep up with the demand. Not that the kids at my table – an assortment of girls and boys – were bad, they were just hungry. Ever seen a dog pack attack a rabbit? It’s like that. Only more savage.

And the noise. OMFG! 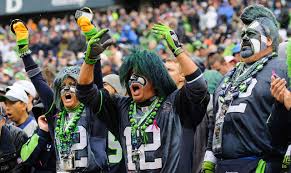 Even been inside the Seattle Seahawks stadium? The decibel level is 136. A pneumatic riveter is 130. A jet engine is 140. Those kids must have hit 145. Loss of sanity occurs around 138 somewhere.

It’s funny how noise will ratchet up. It doesn’t start out loud, but one person has to raise their voice a little to be heard over the next table, then another person does the same, then a whole table has to do it, then the whole room and pretty soon the noise is deafening.

Forget about talking to the kids, it was all I could do to shout, “YOU WANT WHAT? MORE CHICKEN? NO? WHAT? NO I CAN’T GET YOU BEER.”

Afterwards, we cleared everything off the tables and cleaned up, my ears ringing. Then we had a little time to ourselves before we did the campfire thing. Being super cold and slightly wet, we didn’t have the fire outside, we all just sat in a big room with a fireplace. No songs. No marshmellows burning. No Smores (something I’ve never had). No scary stores.

This is what I could see

Instead we listened to the teachers for a bit, then played a game of flashlight hide-and-seek.

Now, of the 300 things they told us to bring, not once did they mention a flashlight. Most of the kids, though, were way smarter than me and brought one. I had to use my iphone which provides a nice bit of light if you’re looking for a sex toy under the bed, but useless for seeing a tree in the forest.

As chaperones, we were given the task of making sure the kids didn’t go out of bounds. Being me, I had no idea where the bounds were even after it was explained to me on a map. Twice. I have, perhaps, the worst sense of direction in the world, and in the dark, even with a flashlight, I am functionally useless. Like being a wingman for Channing Tatum.

However, no one died. Most of the kids had fun, though I’m pretty sure they completely ignored all the boundaries.

So I chalked the whole night up as another amazing Joe-success.

Next up on things to survive. Lights out. Everyone go to sleep. Cuz I was sure that wasn’t going to be a problem.

Aquarius. Traveler. Gamer. Writer. A New Parent. 4 of these things are easy. One is not. But the journey is that much better for the new people in my life. A life I want to share with others, to help them, maybe, to make them feel less alone, sure, to connect with the greater world, absolutely.
View all posts by Joe Cummings →
This entry was posted in Parenting, School, Stepdad, Travel, writing and tagged 12th man, Camping Trip, camping with kids, century field, decibels, Food Glorious Food, humour, school camping, school camping trip, seattle seahawks, the oldest, travel writing, Traveling with children. Bookmark the permalink.