Ok, ok, not our real house, this is Eilean Donan but I would love to live in a castle.

It’s finally here. The Great Move of 2014, where two houses become one, where the great war between the clans will finally end.

I’ll admit it, I was a little nervous. Not about moving in with the Prettiest-girl-in-the-world and her boys, (it was going to be the start of my awesome new life), but it was going to be a whopping move, make no mistake. On one side, a handsome man with hoarding tendencies who had 3, yes 3, dining room tables, about 5 desks and dozen bookshelves. On the other side, lots and lots of toys. Wait, that was still me. On the other side, well, not much, really. So maybe it was more about moving a ton of my stuff. Let’s be honest.

The boys had been great packing up their stuff at their house. The Oldest, bless his heart, dismantled all of the lego displays and put them in bags, complete with instructions. The youngest vacuumed (even coming over to my house to vacuum). They filled boxes with books and clothes and toys. They worked hard. 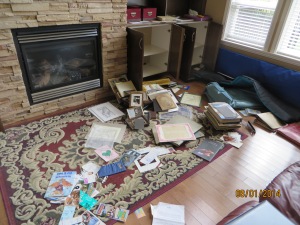 All the stuff that didn’t fit into any of the existing piles, boxes or containers

Me, I packed up over a month, but somehow the last few days got away from me. I’d been so good about packing in a super organized way, (you know, history books sorted by era, fiction sorted by type, size, author and color, writing books sorted by what I’d forgotten and cook books sorted by food types – Oh, yeah, I have a lot of books, too,) but come that last day, all that stuff I couldn’t sort in a OCD fashion was piled in my living room like the house had vomited it up.

So I ended up spending the last night until 3am packing.  The previous two nights I’d stayed up to 2, trying to get it all come together, but that wasn’t enough. However, by 3am, it was pretty much good to go.

So I went to bed and tried to sleep. The boys said they weren’t really excited, like it wasn’t real, but at least they weren’t stressed. They slept well. No worries. Not the same for the Prettiest-girl-in-the-world and I.

Then the movers came. A truck to each of our houses. What took me a week to pack up and move to an official ‘sorted’ area, they did in about an hour. The rest of the stuff took time, but we were on our way by noon.

I won’t go into the details of all the problems we encountered with the movers, as that’s a whole other story, but when we all arrived at the new house, the real work began. Me with my 1 ½ moving trucks, and the Prettiest-girl-in-the-world and her boys with their 11 boxes and a couple of desks and tables.

Now, understand, we have a nice-sized house, yet within a short time, some rooms were packed to the ceiling. Hello “Joe’s Library,” I’m talking to you.

The boys, though were amazing. They’d spent the first part of the day with their grandparents at an epic family gathering. Bad timing on our part. We would have loved to be out with everyone, but we had work to do.

By the time the boys arrived, we were in full-on panic mode. There was simply too much stuff and too little space in some areas. The boys did their best to stay out of everyone’s way and hid in their rooms most of the time. Their beds were set up, their dressers brought in, and their boxes brought up. The boys looked more stressed than excited. I couldn’t blame them. It was all chaos and swearing.

Our house. In the middle of the street. Our house is our castle and our keep

In the end, everything was jam-packed into the house, like stuffing into a turkey. Mmmmm turkey. We were all dusty, hungry and very tired. The Prettiest-girl-in-the-world ordered pizza for us and the movers, then we went to bed, knowing tomorrow would be another very, very busy day.

So what did we learn?  I mean other than me having to throw away a lot more stuff? (I already had a ton and a half hauled away.)

10 things to know about moving

Aquarius. Traveler. Gamer. Writer. A New Parent. 4 of these things are easy. One is not. But the journey is that much better for the new people in my life. A life I want to share with others, to help them, maybe, to make them feel less alone, sure, to connect with the greater world, absolutely.
View all posts by Joe Cummings →
This entry was posted in Parenting and tagged humor, humour, moving, moving day, prettiest girl in the world, the boys, the oldest, the youngest. Bookmark the permalink.

4 Responses to Moving With Kids