There is a lot that I cannot talk about. National security could be compromised. Names have been changed. Locations disguised. I have signed secrecy agreements.

But we finally were able to connect with agent Schmennis. Not his real name. Ex-ninja, ex-navy-seal, ex-delta, ex-Canadian, (his real career cannot be identified), he was our hidden guide to San Diego, texting us with places to go, things to see, kid-friendly locations to eat.

But he was also one of the Prettiest-girl-in-the-world’s oldest friends. Someone she would talk to over her fence. Someone she hadn’t seen in years. Would his face still be the same or would the government have performed reconstruction to hide his identity?

We met him at an abandoned merry-go-round on the fringe of Balboa Park. I suspect it was a undisclosed missile silo, but I can’t talk any more about it. A homeless guy wandered up, filled up his bottle with water from the drinking fountain, but I wasn’t fooled. We were being checked out by the NSCIA.

Then Schmennis arrived. Turns out, no reconstructive surgery. He was the same guy, only a little older, and taking on his toughest assignment to date. Raising 5 kids. 5!!!!!!

Ok, so 2 are nearly doing me in. 2. He has 5, two of which are young twins still in diapers. Forget about his missions to mars or his secret deep-sea dives to Atlantis, this was his greatest challenge. He told stories like hauling the twins out of the dishwasher while one of them tried to eat pebbles off the sidewalk and the other one squirmed in his arms like a an agitated cattapiller, and all I could think was wow.

How do parents do it?

While we caught up with him, his two older boys played with ours. I’m constantly amazed that when left to their own devices, when free from iphones that play angry birds, that the boys can make their own fun. This time, it was excavating an ant hill. Not, perhaps, the most friendly thing to do to ants, (and they had just come from the zoo so you would have thought they would be all over not harming living things), but whatever… Ants.

They dug with sticks, they made plans, they laughed and goofed around, sometimes running around the tree that the ants had made their home (why? I have no idea. I think sometimes young boys just need to run. No reason.)

However, the oldest girl, (not much younger than our oldest) wanted nothing to do with ants and digging and running around. She told her dad how bored she was. A LOT. But Schmennis, having survived nuclear war in an alternate dimension didn’t give in to her desire for him to make it all better. He told her to find something to do.

It’s a skill I have yet to master. I’m still all about the problem solving. “Joe, I’m bored.” “Ah, ok, let’s try stuffing your brother into the dryer and see what happens.” I’m still not good at saying, figure it out yourself. It’s something I’m gonna have to learn.

I have to say I liked Schmennis. Like a North Korean guard on a watchtower, he managed to keep an eye on all his wards. None of them got run over by a very small train that goes around Balboa Park, none were killed by the angry ants and with the Prettiest-girl-in-the-world’s help, none of the twins actually swallowed anything toxic or boulder-like. 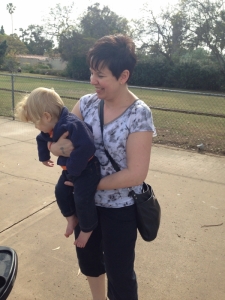 It was a neat thing to do on what would have otherwise been non-stop touristing. It was good for the Prettiest-girl-in-the-world to catch up with her friend and squish some babies. (You cannot believe how she lights up, how beautiful she is when holding a little one.) It was good for the boys to get a chance to be, well, boys.

And, it was good for me to realize that not having to look after 5 children is a freaking godsend. (shhh. Joe. You can’t say ‘freaking’.)

Now, what to do for food?

Aquarius. Traveler. Gamer. Writer. A New Parent. 4 of these things are easy. One is not. But the journey is that much better for the new people in my life. A life I want to share with others, to help them, maybe, to make them feel less alone, sure, to connect with the greater world, absolutely.
View all posts by Joe Cummings →
This entry was posted in Blogging, San Diego, Travel, writing and tagged 5 children, canadian, delta force, humor, humour, merry-go-round, navy seal, ninja, prettiest girl in the world, schmennis, the oldest, the youngest, Traveling with children. Bookmark the permalink.