10 Mini adventures at the Safari Zoo

After we saw the gorillas, we measured ourselves up against the gorilla. The oldest, “You’re nearly as big as the gorilla, Joe.” Ah, thanks. A lot. Then we did the gorilla pose outside of their area. (I used the picture yesterday). It’s fun to do interactive stuff, even if we make it up ourselves.

We ate looking out at the bird lagoon. The youngest continued his photobombing of everyone while the oldest was sure he was being stalked by a red-eyed bird. (The youngest even photobombed the bird shot). We ate, hot dogs, as promised and though it’s not exactly news worthy, I could actually bite one (something I couldn’t do for nearly 2 months due to stupid-ass braces.) Oddly enough, that bird, or one of his cousins, seemed to appear everywhere we went. Hmmm. Maybe the boys shouldn’t have shouted at the ducks. Apparently there is a bird mafia.

3)      Let’s remember how important bathrooms are. Not that I want to talk about what goes on it in there or the adventures we had, (though they youngest is obsessed with wanting to put his face in the air dryer), but it’s vital to not be far away from one at all times. For some reason I don’t yet understand, at 1:10, they don’t need to go to the bathroom, even when asked. At 1:12, they need to go NOW!!!! So we’ve developed a routine, like eating little bits throughout the day, go bathroom throughout the day.

4)      Elephants rock. They’re the Morgan Freemans of the animal world, stately, majestic and likely to kick anyone’s ass who messes with them. Despite the fact it poured with rain for about 5 minutes, we lov

ed watching them lumber around their enclosure. One little elephant played with a barrel while mom watched and occasionally showed him how to roll it. Plus, afterwards, the best picture of me EVER was taken. I almost look good (and yes, I am that vain.)

5)      Lions do not rock. They should. They are the most beautiful of creatures, but for the entire time we were they, they snoozed. This is what they do. For ¾ of the day. It would be like someone watching me for a whole day. The boys were massively disappointed though I think if they had to see a lion take down a gazelle and tear it bloody limb from bloody limb, they might have different ideas. As it was, not matter how much the youngest yelled at them to do something, or the oldest muttered how bored he was, the lions refused to perform.

6)      We had a race up the stairs to the top of the observation tower. The oldest and I bet we could beat the youngest and the Prettiest-girl-in-the-world who took the elevator. I nearly had a heart attack. I beat the oldest but he claims, (and is somewhat justified) that I said it was a race when I was already half up the tower and he was at the bottom. Luckily CPR was not needed though I won’t be doing that again any time soon.

We took the free tour through the African savanna. I could watch giraffes running forever. They are so graceful. Again, seeing these creatures live, in their own habitat, doing their own thing (mostly munching on leaves or trying to find a way to eat bark from a tree protected by extensive fencing wire), allows us to connect to them on a whole different level. We care about them more. How could we not?

8)      The boys loved the rhinos which, I have to say, kinda look like me on a Sunday morning, all grey and grumpy and looking to bang a head into something. The rhinos didn’t do much. Much to my disappointment, they didn’t charge the tour or stand on two legs or sit at a computer writing out a novel, but, again, they were magnificent creatures to see.

Lemurs are stinky. Skunk stinky. We walked into their enclosure and it smelled bad. Apparently, like skunks, they spray nasty-ass stuff on people they don’t like or who bother them. We kept the youngest far, far away from them. But they kept an eye on him, let me tell you. Sure htye looked like they were sleeping, but they’d heard from the birds, this little guy was trouble. 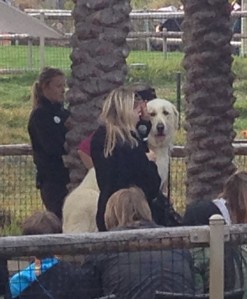 We saw the most amazing thing. To calm cheetahs, the animal, not the yummy, orange snack, they’ve introduced dogs to them. DOGS!!!! Big, hairy, very calm dogs. Apparently, the two species bond. Dogs are great at bonding with a variety of animals, small cats, turtles, horses, sheep, Dennis Leary, but big-ass cats? Who would have guessed?

So, despite the fact we couldn’t do the Asian savanna tour, we had an incredible time. I didn’t have a meltdown, the boys had some amazing experiences seeing the animals and we only got partially wet. Nothing was rushed in the end. We found an Applebee’s to eat at, and while the youngest had a small meltdown over something we never did figure out, the day was a success in my books.

We even got to bed at a reasonable time. We watched Ender’s Game, learned a thing or two about war, and then went to sleep.

Tomorrow, though, we HAD to make it to the Safari Park by 10:40. We’d booked that tour and despite having the Prettiest-girl-in-the-world with us, (she was not against using her powers of pretty to get people to make exceptions to the rules), we were told it would leave on time with or without us.

How hard would it be to make that appointment?

It does take a bit of time to write and load pictures for a blog, but usually only an hour or two depending on how distracted I get looking up pictures of Scarlett Johansson in a bikini for my blog.

So, hey, if you like photobombs or would like to see more pictures of Scarlett J. Lemme know. And please share the blog. Peace out (yes, I just said that!)

Aquarius. Traveler. Gamer. Writer. A New Parent. 4 of these things are easy. One is not. But the journey is that much better for the new people in my life. A life I want to share with others, to help them, maybe, to make them feel less alone, sure, to connect with the greater world, absolutely.
View all posts by Joe Cummings →
This entry was posted in Blogging, Parenting, San Diego, San Diego Safari, Travel, Traveling with kids, writing and tagged Applebees, birds, elephants, Ender's Game, giraffes, helper dogs, hot dogs, lemurs, lions, Morgan Freeman, photobombs, prettiest girl in the world, red-eyed bird, rhinos, the importance of bathrooms. Bookmark the permalink.