Is There Such a Thing as Fate?

Here’s the thing. When we arrived at the Safari park, I managed to leave first my phone and the jackets in the car. Don’t ask me how, I’d had my cups of coffee. But as I stood in line, the Prettiest-girl-in-the-world had to go back for them.

The line took a while. Now it wasn’t a long line, but the people in the booth were very helpful. I’d even say massively helpful, which is awesome when you need information, but not so awesome when you’re trying to get into the park before sunset.

We’d arrived at about 11:30, and, when I got to the window, sure enough, the tours were all booked. Dammit, I should have thought to book one online. Blah. 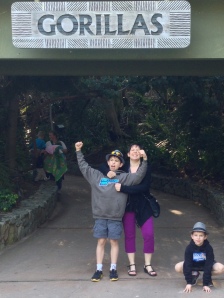 But they said if we rushed, we may be able to see the baby gorilla. So I booked a tour for the next day and we all hoofed it over to the gorilla area. As Dora would say, past the bamboo forest, over the bridge, along the lake, through the tunnel and then you’ll find the gorillas.

See, there’s the safari part, where all the animals get to roam around on the grasslands and interact with each other and play tennis and stuff, and then there’s the zoo portion where the animals are held in traditional (but pretty expansive) pens. 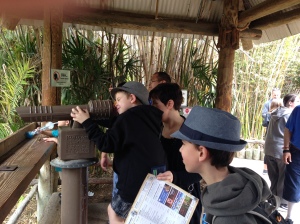 Such was the case with the gorillas. As we passed through the tunnel to reach them, the oldest one observed something deep and profound.

Yes. Yes they do.

As we approached the gorilla exhibit, we saw there was a pretty big crowd. We heard the zoo attendant say the mother and her baby were out. We couldn’t see them as they were far in the back. The mom was protecting her child or at least keeping him away from us human types. The young gorilla scavenged and played on walls of the moat. Cute as hell. Others sat in trees, a couple wandered around and one gigantic silver back sat on a rock outside the group’s cave keeping an eye on things. 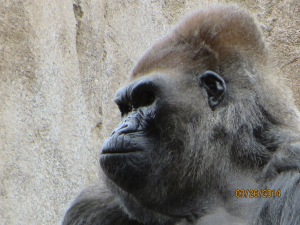 The silverback was magnificent. The oldest boy watched him in fascination. I couldn’t blame him. The youngest marched around like he was in a cage, like he wanted to go in there and play with them. The Prettiest-girl-in-the-world kept her eye on the mom, concerned. She hated that the mom had so many people staring at her. She felt like we were invading her privacy.

I watched the expressions on all the gorillas. Unlike giraffes or rhinos, they have emotions, expressions, eyes like us. I wondered what the silverback was thinking on top of that rock. Look at the picture. What do you think? I watched the young gorilla play and watch us as much as we watched him. I watched another female gorilla get a serious expression on her face, then take a banana over to the new mother.

I know some people don’t agree with zoos, but this is how we connect to animals. It’s not enough to look at them on youtube. To see them, to observe them, to hear them, to even smell them makes us realize how related we are to them, how important it is that we make sure they’re not made extinct.

As we watched, the mother came down from her faraway perch. The crowd got all excited.

Then we saw the mother and the baby. She held him close to her chest at first, then flipped him on her back like I would a backpack.

We watched her for as long as she would let us before she went inside. It was amazing to me how the other gorillas reacted. So .. like us. The younger one wanted mom’s attention so badly. The mother so determined to protect her newborn. It was an honest moment.

The boys were stoked they saw the baby. The Prettiest-girl-in-the-world, a little mixed. She loved seeing the new mom, but this felt a little invasive for her.

Had we gone on the tour, we would have missed that moment.

Anyone who’s been to the Safari Zoo have a similarly magical experience?

And if you ever are bored and need to reblog this, or share it, or tell your friends about it, please do. I love to be read.

Aquarius. Traveler. Gamer. Writer. A New Parent. 4 of these things are easy. One is not. But the journey is that much better for the new people in my life. A life I want to share with others, to help them, maybe, to make them feel less alone, sure, to connect with the greater world, absolutely.
View all posts by Joe Cummings →
This entry was posted in Blogging, San Diego, San Diego Safari, Travel, Traveling with kids, writing and tagged baby gorilla, gorilla, Imani, prettiest girl in the world. Bookmark the permalink.