Looking For Villains. Must Be Evil

But Game of Thrones may have outdone all those other shows.  By quality of the villain.  By quantity.  And by complexity.

First, let’s look at the truly villainous.  Those of such great evil that they have, at least at present, no redeeming features. 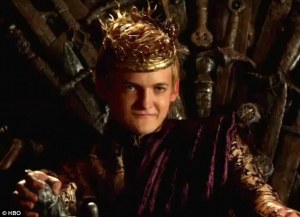 King Joffrey.  What a horrible, horrible little troll.  Who amongst us did not want to punch him in the face as he had poor Sansa stripped in front of the entire court and beaten by a so-called knight?   Everything from his smug expression to his delight in causing others pain to his cowardice when confronted by someone he can’t bully, he is the embodiment of a villain that we want to see hung upside down and gutted.  Pure evil, sure, but pure genius on behalf of the writers as well.

The Mountain.  What a horrible, horrible, big troll.  Joffrey with size.  He hacked a horse’s head off for failing him.  He’s tortured captures for fun and a bit of loot.   He towers over mortal men like, well, like a mountain.  Pure, uncomplicated evil. 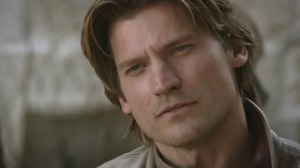 But those two are needed because so many of the other villains are not so easily defined.  Look at Jaime Lannister, the brother of Cersei who began the series by having sex with his sister and then tossing little Bran out the window.  Called Kingslayer, could there be a more villainous villain?  Well, look closer.  When faced with death, he meets it with humor and disdain.  Is he a coward?  Hardly.  His love, his only true love, as twisted as it may be, is for his sister, for whom he will do anything.  Is love a villain’s motive?  Hardly.   When he butchers Ned Stark’s men, is it out of fun, out of some love of slaughter?  Hardly, his brother, Tyrion, whom he also loves, has been taken prisoner and falsely accused of trying to murder little Bran by Ned Stark’s wife.  He’s just sending a message albeit a brutal one.

This is a far more complex villain. 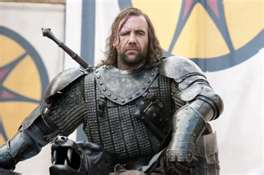 Look at the Hound.  Not as huge as his brother, the Mountain, he cuts down the poor butcher’s boy who dares to play with Sansa.  With his half-burned face, he stands with the king, as loyal as a dog, as dangerous and violent as any man alive.  Yet, when Sansa is being beaten by the king’s knight, he looks on with concern, not joy.  When his brother marches off to slaughter the wounded and helpless Knight of Flowers, the Hound steps in the way to stop him.  A twisted, dark character?  You bet.  But a complex villain, as much a result of his brutal upbringing as any flaw in his character.

Look at Petyr, a backstabbing whoremonger who betrayed Ned Stark.  But did he not give Ned a chance to live, did he not warn him?  Does he not have his own type of honor, however self serving it may be?

Look at that weasel Theron Greyjoy.  He porks all manner of lovely girls and sneers the whole time (even fingering his own sister!)  Weak and cowardly and a total perv, sure.  But look at his dad.  When Theon comes home, no one is waiting for him.  When his father greets him, it’s not ‘hey, son, how the hell are ya?’ it’s ‘did you pay the ‘iron price’ for that necklace?’  (Meaning did you take it from someone you killed.)  Man, that’s harsh.  And all Theron wants, all that most young men want, is his daddy’s approval.  Is that a villainous desire?

I could go on and on and on as there are so many heroes and so many villains in this story, often being the in the eye of the beholder but that’s what makes this series so brilliant.

If you haven’t seen it, start with episode 1, year 1.  Start at the beginning and prepare for something T often does not do well, some great villains.

Aquarius. Traveler. Gamer. Writer. A New Parent. 4 of these things are easy. One is not. But the journey is that much better for the new people in my life. A life I want to share with others, to help them, maybe, to make them feel less alone, sure, to connect with the greater world, absolutely.
View all posts by Joe Cummings →
This entry was posted in Parenting. Bookmark the permalink.

1 Response to Looking For Villains. Must Be Evil