Looking at things in a totally unicorn and rainbow way, the pandemic has given us some unique opportunities to explore life. Before we get to what The-Prettiest-Girl-in-the-World has done, let’s look at the state of the world.

Seems there’s a resurgence of cases worldwide as the second wave begins, with the tiny country, San Marino, having the highest death rate per capita at 124.3/100k. Honestly, this is not a prize to be proud of. Canada is at 25.2 . US is at 62.96

Now, in BC, for some reason, we’re having an election. It’s a wonderful way to spend time and money during a pandemic, especially during a rise in cases. Meanwhile, housing sales are going crazy, and prices are, once again, through the roof. Honestly, I don’t really understand how this is possible, but then I’m still stumped on how they get the caramilk in the caramilk bar, (the answer is here.)

Locally, gas is around $1.24, disinfectant wipes are still hard to find, but little else seems to be consistently out. Schools are back in session, and for some reason, every school district has different rules on when and how they report Covid cases. That’s like having 30 husbands define what color blue the wall is.

However, back in our house, The-Prettiest-Girl-in-the-World has taken on creating a family tree.

Now that is a rabbit hole of epic proportions, especially if you have the patience to sort out how Ancestry.ca works.

To be successful, you have to be part detective (“so, I’m hunting for Bill Smith who could also go by Billy, William, Will or the Blue Mountain serial killer,”), part full-on OCD researcher, (ok, so this link leads to another link which has a link to a link that’s linked to another link of links that has a link to something linkie,”) to part tenacious bull-terrier, “wait, a week ago, I read something in a 1920’s newspaper about a Bill Smith who was eaten by cannibals in New Guinea, so I need to find something on the cannibal named Burbie so I could track down if this was indeed the Bill Smith I’m looking for.” (Sadly, spoiler alert, it turns out New Guinea cannibals didn’t really keep a lot of records.)

In other words, to be successful, you have to have the traits of someone who would work at a library.

I have to say, I’ve been super impressed by her research. She’s read obituaries, marriage certificates, birth records, and newspaper clippings, found photos and army records, and even tracked down hints at long-buried secrets.

I get the excitement. I mean, who cares if you find Joe who was born and did nothing, but what if you find an ancestor who porked Queen Elizabeth or one who was a notorious sheep thief. Or both? And had a peg leg?

What if you found someone who had fled the civil war in the states, a widow, who trekked with her two, young children westward, found a husband, wagon-trained it to Oregon while braving hostile Indians and outlaws, built a home, literally, then, made her way to the Okanagan?

That would be so cool, right?

But sites like Ancentry.ca can only do so much. To know someone’s history, it has to be written down, or told to someone who then, you know, writes it all down.

My guess is that a lot of people on her tree have amazing stories to tell, but those stories are lost in time. Obituaries will tell a little. John Smith was an accountant for 40 years, married Doris Jones, had 22 children, and was president of his local legion.

Ok, but to know more, if you don’t have a written story, you have to go deeper. The-Prettiest-Girl-in-the-World does just that.  Legion, you say? Hmm, that means he was in the armed forces. Oh, wait, there he is, Italy, 1943-1945. What happened there, Joe? Oh, good lord. The Canadians did that? And the woman he married, interesting, she had an Italian name. Did he meet her there?

Lots of fun stuff. However, it does take a TON of time and dedication. 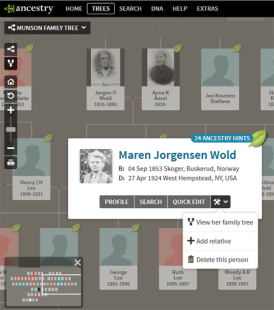 My mind explodes after a while

Having lost my Auntie Ruth, my Uncle Jim, and most recently, my amazing Auntie Marg, I hate that I won’t be able to hear any more of their stories, of how they met their spouses, of children lost, of epic journeys taken, of hope and heartbreak.

Building a good family tree is a great way to connect with family history, but for everyone out there, it’s just as important to record the stories you hear so that they can be discovered by future generations, so that someone can find that story and rush to your husband who’s right in the middle of watching The Good Place and say, with great excitement,

“I just found out about one of my ancestors who….”

By recording and remembering, we honor those who’ve come before us.

At least that’s what I think.

In the meantime, stay safe, stay healthy, and respect the new world.

Aquarius. Traveler. Gamer. Writer. A New Parent. 4 of these things are easy. One is not. But the journey is that much better for the new people in my life. A life I want to share with others, to help them, maybe, to make them feel less alone, sure, to connect with the greater world, absolutely.
View all posts by Joe Cummings →
This entry was posted in Covid19, family and tagged ancestry, ancestry.com, bc, chinese corona virus, chinese virus, civil war, corona virus, coronavirus, Covid19, family, family history, family tree, fear, going crazy, hug, hugging, hugs, humor, isolation, italy, marriage license, mental health, mitigating, obituary, pandemic, the oldest, the prettiest-girl-in-the-world, the youngest, the-prettiest-goldendoodle-in-the-world, Travel, vacation, vegas, visits, wagontrain, war records, writing. Bookmark the permalink.