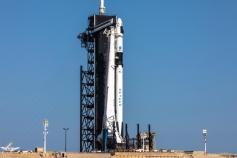 SpaceX. We saw  this launchpad when we went to the Kennedy Space Center

Some big wins today, but I had a terrible realization.

First, though, let’s see what’s what in the world.

The-Youngest and I set our clocks to watch Space X launch its first manned rocket into space. Nature, however, had other plans, and it was postponed. Elon Musk decided to rename his child from X Æ A-12, to Mothernaturesucks12.

I do wonder sometimes in my darkest moments, after a couple of pints of Guinness, if we are not a virus trying to infect the universe. Right now, the universe is pushing back hard, but I have faith in our ability to thrive and infect other worlds.

In BC, White Rock will be reopening its beach and pier. Seems to me like trusting teens with fireworks and gasoline, but I guess we have to trust the public to be respons…oh hell, I can’t even say it without snorting out a cynical laugh.

In Langley, the fire department is doing birthday drivebys. Not for kids, I think, but hot girls. Ok, no, I’m wrong, sometimes it’s kids, too. I wonder if they’ll do one for The-Prettiest-Girl-in-the-World?

Here at home, my peppers are still alive. That’s a miracle akin to Star Wars and Star Trek fans agreeing on which of their latest movies sucked more.

Also, The-Oldest did his capstone presentation (that final big project every grade 12 has to do.) He freaking rocked it. In fact, listening to him from the other room, I was stunned how well he spoke, how well thought out his ideas were, and how well his hair looked. He was 0% goober and 100% adult. Wow. Just wow.

His presentation, perhaps not surprisingly, was an album of music he’d made, but it was music based on his emotional journey through childhood. It made The-Prettiest-Girl-in-the-World cry. Who knew that he had emotions, let alone an impressive self-awareness.

I’m very proud of him.

As for The-Youngest, the poor bugger had to go back to the toe doctor because his toe isn’t healing. The doctor performed some sort of medieval torture on him, cutting off excess skin and stuffing cotton batting between the skin and the nail. It looks awful. He was, however, very proud he didn’t make a sound.

I guess all that goalie-ing is finally paying off. He’s so used to pain that he can shrug off this brutal toe-butchery. I’m proud of him, too. I’m counting this as a win.

The-Prettiest-Girl-in-the-World remains a bit in limbo over her job. I know everyone is working on a plan, and that they have to factor in union rules, workload, as well as health and safety concerns, so this is a big job. Still, uncertainty sucks.

My terrible realization was that I no longer have any good advice to give, so I’m giving advice from lyrics. Today’s nugget? Down in Jamaica, they got lots of pretty women, steal your money, and then they break your heart. (from On & On – link below)

But he already knew it.

Until the next blog, stay safe, stay healthy, and respect the new world.

Aquarius. Traveler. Gamer. Writer. A New Parent. 4 of these things are easy. One is not. But the journey is that much better for the new people in my life. A life I want to share with others, to help them, maybe, to make them feel less alone, sure, to connect with the greater world, absolutely.
View all posts by Joe Cummings →
This entry was posted in Covid19 and tagged chinese corona virus, chinese virus, corona virus, coronavirus, Covid19, depression, driving, fear, gas prices, going crazy, heritage, history, humor, isolation, mitigating, pandemic, sunday driving, the oldest, the prettiest-girl-in-the-world, the youngest, the-prettiest-goldendoodle-in-the-world, vegas, writing. Bookmark the permalink.