Today was a day to celebrate the small miracles.

Before that, though, let’s take a look outside of our Fortress of Solitude. Parking is now FREE at hospitals. I won’t say it should have been done sooner, but it’s done now and that’s a true miracle.  We also received our first school email. Looks like homework is in the works. This does not please The-Youngest. Lastly, Victoria police were called to nine house parties over the weekend. Come-on! What is it doing to take?

Here, the big event was The-Youngest’s toe operation. He’s had a nasty ingrown toe for quite a few months and we were super glad to get it taken care of today.

That was the first of the small miracles -The operation wasn’t canceled. When he went there, he and the doctor got along like best friends. I won’t say that was a small miracle as well, but it kinda was.

Then, because The-Youngest and the doctor had bonded over the 1917 movie, the doctor did 4 little freezings to make the bigger freezing of the toe completely painless (ok, likely the doctor would have done that extra freezing anyway, but it makes for a better story if it was due to The-Youngest’s charm.)

A snarky me would say that level of compassion is amazing and might count as small miracle #3, but I’m not going to count it. The-Youngest went home delighted he felt no pain at all, but a little sad he couldn’t watch the whole operation.

The-Prettiest-Girl-in-the-World was horrified though. Watching her baby’s toe get cut open and skin cut off and bionic implants put in (ok, the last bit might have been my vision of what happened) was very tough on her. Any mom would understand.

The-Prettiest-Girl-in-the-World had the most miracles, however.

Her miracles included making her hair behave, remembering how to put on make-up, fitting into her jeans after a few weeks of stress eating, AND recalling how to drive after nearly 3 weeks in the house.

Honestly, she looked great, but I worried about her going out, so I loaded her up with one of our two remaining containers of wipes. “Wipe down the doctor if you have to!” I said.

Of her miracles, I think the making her hair behave was the most impressive – It has a mind of its own.

For Vegas, the miracle was being able to run around like a goof for about 5 min. Being old and arthritic, this is a big deal and I think she’ll pay for it tomorrow, but it was nice to see the spazadoodle return for a short time. She even ate 3 meals, when some days, she eats nothing.

The-Oldest finally conquered the tricky rhythm of the Mephisto Waltz. As usual, I have no idea how hard this thing is, but he was so excited, he bounced around the house like he’s found a cure for Covid-19 (or even better, a cure for stupidity.)

As well, (and I shouldn’t count this as a miracle, but I totally am), he’s developing some pretty impressive guns. He’s actually got muscles and they’re getting bigger. Watch out, girls, when he comes back, he’s gonna be a hunk.

For me, it was a miracle that I finally got through to my bank, but sadly, they still failed to email me information that I needed. Like many, we’re hitting a serious financial wall and we may need some short term assistance. Long term, I hope we’ll be ok, but there is a bit of a cash crunch at the moment.

Had I been really blessed, my miracle would have been, “Why yes, Mr. Joe, no problem, you and I will solve this issue in 5 min,” not “I’ll start the paperwork,” lol.

Other perhaps smaller miracles also need to be recorded for history’s sake.

I didn’t eat a bag of chocolate today.

The-Youngest actually listened to something I said (about safety precautions during this time.)

The-Prettiest-Girl-in-the-World didn’t wake up due to Vegas’s farting.

I didn’t hammer my finger or cut off my hand while installing another shelf.

The-Prettiest-Girl-in-the-World did 3 hours of learnding without falling asleep during a TED-talk. 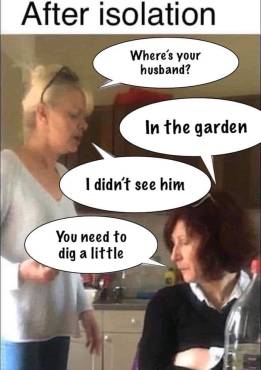 My favourite meme for today.

We didn’t lose power, water or internet. No, wait, that’s a big one, since it’s something that we take for granted. Take that away, and all hell will break loose. Worse than all the moms going grey.

I guess what I’m trying to say is I’m grateful for the small things today, that I have a great family, that I still have a home, and that no one is sick at the moment. It’s about resetting expectations in a troubled time, a time we will remember (and talk about) for as long as we live.

Until tomorrow, be safe, be healthy and respect this new world.

Aquarius. Traveler. Gamer. Writer. A New Parent. 4 of these things are easy. One is not. But the journey is that much better for the new people in my life. A life I want to share with others, to help them, maybe, to make them feel less alone, sure, to connect with the greater world, absolutely.
View all posts by Joe Cummings →
This entry was posted in Covid19 and tagged chinese corona virus, chinese virus, corona virus, coronavirus, Covid19, dogs are the best, humor, isolation, miracle, miracles, pandemic, parenting, parenting fails, schools, the oldest, the prettiest-girl-in-the-world, the youngest. Bookmark the permalink.