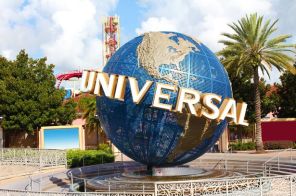 At 10:40, the crowds at Universal Studios were beginning to grow, so we had to choose wisely.

So, we decided to do the important adventures, first. Not the Hulk ride. Not the Rip Ride Rocket. Not one of the water rides.

No. We were going to do something for me. The Wizarding World of Harry Potter! Expecto Patronum!

The lineups to get into Universal Theme Park were longish, but not bad, and we had the best attendant help us get through. I had booked tickets online and wasn’t sure how that would work, but it turned out all we had to do was use my phone to show them, then press our finger for the fingerprint scanner, and that was that.

The attendant was an older fella. Older than me, anyway, and he had the biggest smile on his face, and when he found out where we were from, he talked hockey. His team was, and always will be, the NY Islanders. Where he was from.

I can’t tell you how impressive it is to be greeted in a positive way when you start out in a park. Disney does this well, no, really, really, really well. So, too, it seems, does Universal.

We made our way out of the crowds into the Universal Studio streets. The-Youngest loved that he could walk in the middle of the road and no one yelled at him. The-Oldest saw ‘Doc’ from Back to the Future walking around, and waved at him. Marilyn Munro walked by in her iconic white dress and looked at The-Youngest, saying “I think that one’s giving me a look.”

The-Youngest is about to meet Marilyn Monroe

The-Youngest blushed so red, he looked like someone had lit a fire inside his head. Before she could say anything more, he rushed away from her like an energizer bunny suddenly hit by lightning.

Then we entered one of the BEST parts of Universal. Simpson’s land.

Now, it’s not the BEST place for rides, sure, but it ignited the nerd inside of me. There was the Springfield sign, and over there, the Kwik-E-Mart. Over there, look, there’s Krusty Burger, OMG, we HAVE to have a Krusty Burger, and there’s Duff Beer, OMG, I have to have some Duff beer, OMG, there’s Mo’s Tavern, we have to go in and burb with Barney, and there’s Lard Land Donuts, OMG, we have to get a Homer donut!

See, I guess at my core, I’m less of a Disney guy and more of a movie and TV guy.

As I hopped around pointing at everything in Simpson’s Land, the Prettiest-Girl-in-the-World looking at me like I was having a seizure, The Boyz decided they’d go on a ride – The not-too-scary Kang & Kodos’ Twirl ‘n’ Hurl. The-Youngest told me, “Joe, did you know, it’s a good plan to do easier rides before you do the Hulk ride. You have to work up to it.” (The highlight of his plan was going on the terrifying Hulk Coaster.)

Kang and Kodo didn’t disappoint. At least didn’t disappoint The-Prettiest-Girl-in-the-World and I. We watched the boys go around and around, and laughed out loud at the commentary. “You will know the ride has ended when your vehicle comes to a complete stop, or you have been eaten…I didn’t just say that.” “Thank you for betraying mankind. Go home and enjoy your shame.”

After The Boyz got off, The-Oldest, much to our surprise, decided he HAD to have a Homer t-shirt. No words on it, just a Homer face. All yellow. 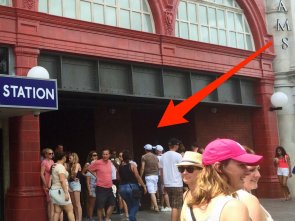 Shhhh! Don’t tell anyone. This is the secret entrance to Harry Potters Wizarding World.

Since it was so very, very, very rare for The-Oldest to want anything that didn’t involve a piano, we got him the shirt. Could it be that he was going to have a good time here?

I looked over towards Diagon Alley. I knew I was.

Time for some magic!

Aquarius. Traveler. Gamer. Writer. A New Parent. 4 of these things are easy. One is not. But the journey is that much better for the new people in my life. A life I want to share with others, to help them, maybe, to make them feel less alone, sure, to connect with the greater world, absolutely.
View all posts by Joe Cummings →
This entry was posted in Disney And Universal 2019, Travel and tagged Disney, Disney And Universal 2019, Florida, Orlando, parenting, prettiest girl in the world, rides, step-dad, stepdad, stepdaddy, stepdaddying, summer vacation, the oldest, the prettiest-girl-in-the-world, the youngest, Travel, Travel Blogging, Travel Disney And Universal 2019, Traveling with children, Traveling with kids, Traveling with Kids blogging, universal, universal studios hollywood, vacation. Bookmark the permalink.