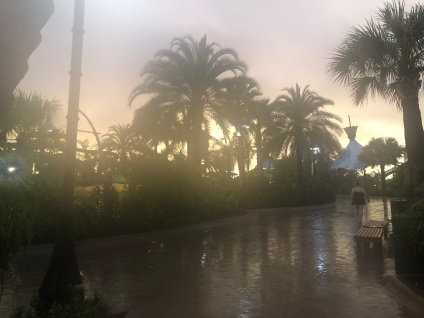 Was it a dream? Did we really go back to Volcano Bay?

We were desperate to salvage the day. Maybe a movie? Maybe find an indoor race track? Maybe a gun range. Wait, what, no guns for The-Youngest? Ok. But something. Something…

After successfully bra shopping for The-Prettiest-Girl-in-the-World, (The Boyz remaining in the car to avoid awkwardly looking at women trying on bras), we decided to give Volcano Bay one last look on the way back to our resort to reconsider possibilities.

With the rain still pouring down, our thinking was, yes, it was still raining in a way only a tropical location or movie shoot can rain, but we hadn’t heard or seen lightning for a while, so where was the harm in checking Volcano Bay?

So we drove past more churches than I’ve seen in my life, through lakes forming on the roads, beside rivers raging in what had been drainage ditches, past houses darkly stained by mildew, hoping against hope.

By now The-Youngest had come to terms with the idea his life was over and all that he had ever hope for, dreamed about, lay in ashen ruins. But when we drove near Volcano Bay, despite the rain still falling, we saw people climbing steps. To rides!

The-Youngest sat up so quickly that I think he popped a joint, but he’s young and joint popping isn’t that big a deal. Excitedly, he bounced up and down, as we took the turn into the parking lot.

Now, I won’t say this was my finest driving moment, but it was one of the oddest. The cones were all over the place and I had to stop in a parking lot so vast it can be seen from Mars to figure out where to go. As I did so, dozens of cars literally raced around me, like I was a frightened rabbit on Lightning McQueen’s race track (when in fact, I was just a confused old guy!)

It didn’t take long for us to get into the park as no one was there. It was a little spooky, but kind of cool as well. Maybe 200 people wandered around, (which I totally get is not ‘no one’, but in a park built for tens of thousands, it seemed to have more staff than customers.)

Hit the most important rides first! We didn’t know how long they’d allow us to stay in the park.

We could still lose the park to lightning or a North Korean attack, so doing the rides in any other order made no sense.

The ride The-Youngest chose was the Krakatoa, a ride like a roller coaster where we sit in a canoe-like thingee and get shot through tubes, up hills and down, through waterfalls, all by magnets.

Without ANY lineup we got on and shot off like a rocket. Wow. Every hill we crested we got air. Every turn we made in the tunnel seemed one inch from being an exercise in physics to see if we could glide on the roof.

Volcano Bay. With the soft, tropical downpour, we had the park to ourselves, making this one of the best days ever!

It was amazing fun!

Then, because we were old and slow, The-Prettiest-Girl-in-the-World and I went on the lazy rivers. Again, with no people, the faster river was a completely different ride, the waves much, much higher, the speed much, much faster, and there weren’t a thousand people constantly accidentally punching you in the face.

We had a blast, but man, was it ever a workout to try to keep together, to dodge the painfully, powerful waterfalls and avoid the few numbers of little kids who rocketed the rapids like insane otters.

The slower river was better for us, though if you saw me trying to get into an inner tube, you would have laughed. It was like trying to fit a polar bear into a lifesaver.

But, as we got our lazy river on, The-Oldest and The-Youngest went on ride after ride after ride, literally walking on to any ride they wanted. Their bare feet slapped on the wet concrete as they raced from the Krakatau Aqua Coaster to the Kala and Tai Nui Serpentine Body Slides then to the Ohyah and Ohno Drop Slides.

No line ups. None.

With the most beautiful purple sky overhead, we joined them for the Krakatau Aqua Coaster (which was a powered by jets of water), and boy, was that fun, especially since all we had to do was climb a few steps and go right on it.

While the rain continued to fall, as the light began to fade, The-Boyz raced away from us to do their final rides before the park shut down. We floated in the lazy river one last time as I soaked up the experience.

The rain was soft and heavy, but warm, not pelting down like ice needles. I didn’t care about the rain, we were in a waterpark getting soaked, so getting extra soaked really made the experience even better. No, wait, more than better, it made the experience immortal.

We were in the rain in a waterpark that we basically had to ourselves. Like we were billionaires.

I wandered around a bit, taking pictures of the stunning sky, I but I knew, I just KNEW I would remember this magical night forever. Like when I first looked upon the green, rolling hills of England when I was 18, like when I first smelled a peat fire when I was 24, like when I saw The-Prettiest-Girl-in-the-World walk down the aisle to marry me, breathtakingly beautiful, me wondering how I managed to get so lucky.

What had started out as a disaster had ended up being an amazing day! 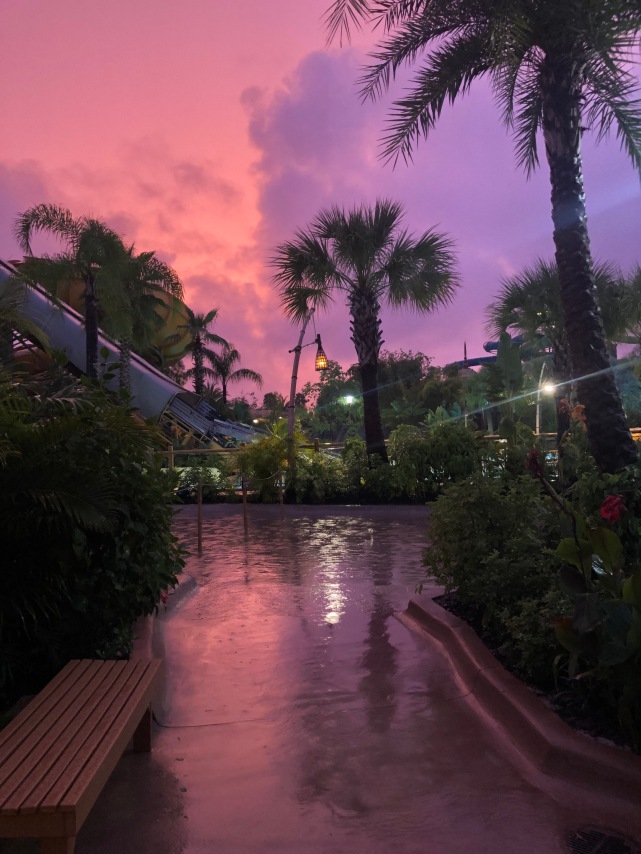 One of the best pictures I’ve even taken – of one of the best nights I’ve ever had traveling. No filter on this shot at all, but (to be honest), the light was even more spectacular in person.