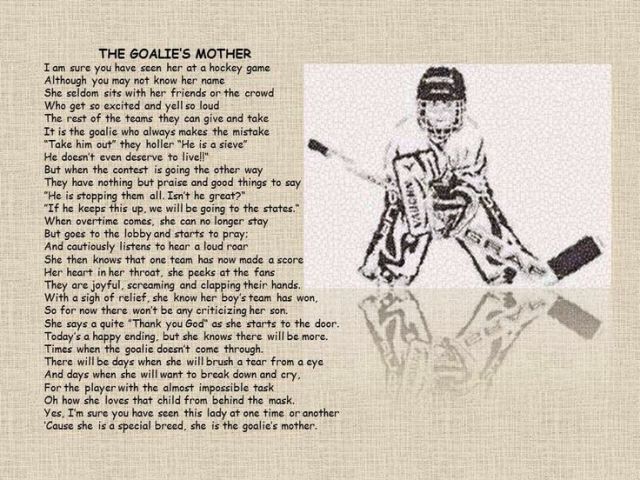 This is for the goalie mom but applies to any goalie dad as well. And maybe the grandparents, too.

Being a goalie parent is something like being Donald Trump’s mom, you’re just kinda waiting for something bad to happen.

But when a goalie makes a mistake, a goal is scored. The other team is super happy, but your own team is not. Your coach is not. Your fans are not.

Now, it’s not like The-Youngest hasn’t had bad games in the past, all goalies do. Heck, when he was starting out, we lost count after 20 in one game. But this isn’t the super cute Timbits hockey, this is Pee-Wee and people take things a lot more seriously.

So when The-Youngest had a bad game, a game where every bounce went the wrong way, where he was a fraction of a second too late, where he made bad choices, we could only sit in the stands and cheer him on, (apparently, much to the Prettiest-Girl-in-the-World’s annoyance, moms are not allowed to rush on the ice and give their boys a big kiss on the head.)

Then, when they switched out goaltenders (as they do when they have two on a team), he skated off the ice, dejected and sat on the bench, facing the wall.

For the first time since he began playing, that game got to him. And we could do nothing.

The coaches came over and talked to him, the team patted him on the head, tried to encourage him, but we knew he sat there crying, upset that he had let the team down.

And we could do nothing!

I guess it’s a part of growing up. He must go through these things himself. He must feel what he’s going to feel. He must react how he’s going to react. Sadly, we can’t rush off to give him a big hug and tell him it’ll be ok.

It’s a pain no one tells you about. It’s a parental pain. It’s a pain that comes from the heart. You can actually feel it there. Squeezing.

Sometimes, however, we can’t.

And that’s a lesson I didn’t want to have to learn.

A November 11, 1958 photo of Montreal Canadiens’ goaltender Jacques Plante. Now, imagine your the mom of this goalie!

Aquarius. Traveler. Gamer. Writer. A New Parent. 4 of these things are easy. One is not. But the journey is that much better for the new people in my life. A life I want to share with others, to help them, maybe, to make them feel less alone, sure, to connect with the greater world, absolutely.
View all posts by Joe Cummings →
This entry was posted in Parenting and tagged goalie, goalie moms, goals, hockey, ice hockey, pee wee, prettiest girl in the world, step-dad, stepdaddying, the youngest, timbits. Bookmark the permalink.

2 Responses to The Big Loss