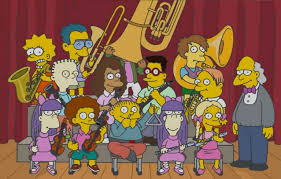 Is The Simpsons the greatest cartoon of all time?

Would a 2 hour!!!!!! high school band concert be as challenging as an elementary school one?

Honestly, cuteness only goes so far when you have to sit through a 5th-grade concert. It’s an assault on the ears that even I – a person who has the musical ear of the tin man – find a bit overwhelming unless I’m properly medicated.

But I found out that a high school IS different. For one, they made the-Oldest dress up in a tuxedo shirt with a black bow tie, cummerbund, and pants. Thankfully, I didn’t have to tie the tie (since I’d more likely end up strangling the poor kid), but I had to loan him a pair of good shoes.

However, in typical teenage faction, he didn’t know if he had to wear his outfit earlier in the day for photos, and the best he could remember was, ah, I think there’s some sort of photo thing today, sometime. Maybe.

This said at 8am as we’re leaving for school.

I put it down to nerves. It was his FIRST concert as a percussionist. He’s an amazing, gifted piano player but in band, he was told that he had to learn another instrument. So, for weeks, he’s been ting-ing the triangle, drumming the drum, bonging the xylophone (which they call ‘bells’ for some reason – probably named by the same person who called illegible handwriting ‘griffonage.’)

That he had to learn a whole collection of instruments made me a little anxious to watch him. I think I was even more nervous than him. I know how hard he worked to learn the percussion instruments – figuring out when he had to bang on a block of wood, shake the tambourine or clash the cymbals. (Plus, look at even spelling those last two damn things… so hard.)

So, as the conductor/teacher raised his magic wand to begin, I felt a shiver of terror. My mouth went dry. I wanted to close my eyes. He was a superstar on the piano, but percussion was still a challenge to him.

Then the band began to play.

And he did his part, (and as far as I can tell, flawlessly). I could see the look on his face change as he got more and more confident up there – like he knew he was the s**t and was proud of it.

I let out a sigh of relief.

And, hey, turns out that high school band isn’t that bad at all.

I don’t have the ear to tell you if they played perfectly, I just don’t know, but what I do know is that I could sit through a 2-hour concert again without sneaking vodka into my water bottle.

He will be just fine in high school band.

And therefore, I too will be fine.

Aquarius. Traveler. Gamer. Writer. A New Parent. 4 of these things are easy. One is not. But the journey is that much better for the new people in my life. A life I want to share with others, to help them, maybe, to make them feel less alone, sure, to connect with the greater world, absolutely.
View all posts by Joe Cummings →
This entry was posted in School and tagged band, bells, concert, cow bells, cymbals, drum, drums, dwight, griffonage, humor, humour, jazz band, music, parenting, percussion, percussionist, step-dad, stepdaddy, stepdaddying, tambourine, the oldest, triangle, walnut grove senior secondary, WGSS, xylophone. Bookmark the permalink.