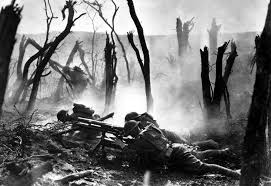 The epic Nerf war of 2017 would be fought in the backyard, a yard full of rocky outcroppings, bushes, trees, chairs and one trampoline.

Rules were set (rules being even better than plans, IMHO.) They were a mix of adult rules and kid rules.

When you’re hit, you have to stand still until you’re tagged out by a team mate. (kid rule.)

No constant shooting of people who have been tagged out. (adult rule).

No stopping to reload (Kid rule, brilliantly applied to maximize their advantage, as you’ll see below.)

No hitting anyone with weapons (adult rule.)

No one running out into traffic, no one running into the flower beds, no one shooting an ally for fun, no one eating any bullets, no climbing on cars, no digging trenches, no having fits if you lose, no one screaming out things like “Kill them all, kill them!!!!”, and everyone, yes everyone, will pick up the bullets after the war.

(ok, let’s face it, when it comes to rules, the parents are always locked and loaded, and ready to go.)

The war should have been fair. 3 adults vs 3 kids. What the adults – especially me – lacked in speed, energy and an ability to scream at the top of our lungs, we made up with cunning, experience and hundreds of hours of playing Call Of Duty.

However, the kids knew this, so they stacked the deck. 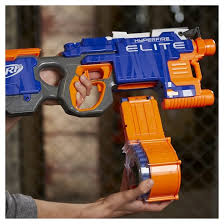 They each had a gun that fired about 300 bullets a second, backed up by drum magazines (at least 2) that force fed a thousand bullets into the barrel.

We had one pistol that had three shots and looked like the Cricket from Men In Black. We had one gun that jammed every two shots. We had a wildly inaccurate rapid-fire rifle that would have been fine had it not had a 6 bullet magazine.

Undaunted, we hid behind rocks, bushes and (in some cases) each other and waited for the onslaught. Blue bullets spitting out of their guns like horizontal hail, screaming like rabid soccer fans, they charged. We moved them down. We won the first game.

In hindsight, I think that was their plan because, after that, they spent the next hour shooting us so many times that I think I still have one bullet lodged in my ear and I looked like I had a bad case of measles from all the direct hits.

However, like the heroic defenders of the Alamo, we fought on, but we were outgunned, outrun, and frankly, outplayed. Seems kids can play Call of Duty as well. The Oldest would march forward like a Terminator with his rapid fire, belt-fed blaster. Fearlessly, he’d advance into a storm of bullets while the younger ones flanked us. We were so focused on hitting the Oldest that we didn’t see the little sneakerlings until it was too late.

The most fun part, though was when the Oldest’s gun jammed and he threw it aside, chasing around his mom while throwing bullets at her, the two of them laughing like crazy.

Panting, an hour later, we called it a day. I want to say we won as much as we lost, but having been mowed down about a hundred times desperately trying to revive The-Prettiest-Girl-in-the-World after being hit, I can say we likely lost badly. 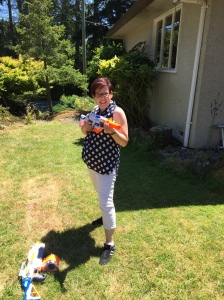 No matter. We had a ton of fun. Even The-Prettiest-Girl-in-the-World could be heard shouting battle cries like a Valkyrie filled with berserkergang bloodlust. All I can say is it was lucky we had rules against hitting people with the nerf guns – “You call that shooting, Joe?!?!?! A blind grandmother with Parkinson’s could have hit more than you did! You call yourself a Viking warrior? Get it in gear, buttercup! Arrrrrrrr!!!!!”)

But, panting, sweat dripping from my forehead, as we picked up a zillion little darts, I thought, not for the first time, how lucky I am to have such a great family, such a cool wife, and such great opportunities for fun.

Aquarius. Traveler. Gamer. Writer. A New Parent. 4 of these things are easy. One is not. But the journey is that much better for the new people in my life. A life I want to share with others, to help them, maybe, to make them feel less alone, sure, to connect with the greater world, absolutely.
View all posts by Joe Cummings →
This entry was posted in Parenting, Travel, Traveling with kids and tagged alamo, call of duty, guns, humor, humour, nerf, nerf guns, no prisoners, prettiest girl in the world, stepdaddying, terminator, the prettiest-girl-in-the-world, the youngest, Traveling with children, Traveling with kids. Bookmark the permalink.