The rest of the day began well enough. Most horror novels start this way. 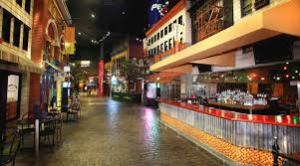 The Village Street Eateries in NY, NY, Vegas. My favourite area to eat.

We had THE BEST lunch at NY, NY. I love this hotel, with its fake streets and fake Manhattan skyline and fake Statue of Liberty.

We ate at the not-so-fake Broadway Burger Bar and Grill. Made our own. The boyz had their traditional hamburger – patty, bun and ketchup, no, nothing more, just plain with ketchup, no, no tomato or mustard, just plain.

I ate the massive and diet-killing philly burger, which was largely a huge burger stacked with cheese, steak, and grilled onions and peppers. OMG good. I instantly gained 30lbs.

Plus, our waiter was simply fantastic. Chatty. Informative. Funny. He not only served us food, he gave us some great advice as well.

However, it was right after that meal that things started to go pear-shaped.

The-Prettiest-Girl-in-the-World began to get a migraine which could be from me making loud eating noises and moaning, ‘Omg,’ this burger is good for the entire lunch, or it could be the beating her head took on the roller coaster, or it could simply be the stress and pressure of a day filled with making sure The-Youngest does not behave like a rabid howler monkey hopped up on coffee.

But by the time we were done, she wasn’t feeling well at all.

We could have gone back to the hotel, but The-Prettiest-Girl-in-the-World wanted to make sure her boy had a great day. She’s amazing that way.

So off to the Hershey store we went. 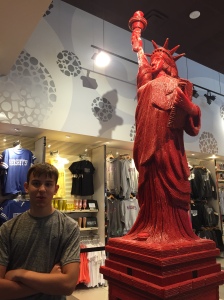 Yes, they made a Statue of Liberty out of Twizzlers. This is Vegas, after all. Be thankful it wasn’t condoms.

Now, it’s quite a balance for us, letting The-Youngest have the best time possible while making sure we don’t get kicked out of a store because our child climbed the walls or stuffed his underwear full of hard candy.

I mean, on one hand, we want him to be a kid and enjoy those kid-moments of pure happiness.

On the other hand, we do not want to live in a world ruled by unsupervised 9-year-olds going all Lord-of-the-Flies, taking off his shirt and rubbing chocolate on themselves.

But wow, did he love that store. He dragged his mom to every part of the store, showing her cups that looked like they were made out of chocolate, pillows that looked like Jolly Rancher candies, water bottles with the Hershey logo, and HUGE chocolate bars the size of brief-cases.

What, no apple flavoured Jolly Ranchers? But I saw them on YouTube!

Then he ran into the most terrible of things. Something he’d not prepared himself for in any way despite having watched hours of video on what the inside of the Hershey store looked like. They didn’t have a dispenser for apple flavoured Jolly Ranchers.

The-Youngest wasn’t pleased. Nothing was turning out like the YouTube videos showed. First, the roller coasters were terrifying. No one told him that. Then we wouldn’t let him gamble more than $2. THEN, horror of horrors, no apple flavoured Jolly Ranchers!!!!

To be fair, he took it pretty well. It would be like me going to a tank museum and finding all the tanks didn’t have guns, or The-Prettiest-Girl-in-the-World going to a shoe store and finding a perfect pair of shoes, but forgetting her wallet. Or not having them in her size.

But he couldn’t understand why they wouldn’t have his favourite flavour. He wanted to speak to someone about this.

Luckily, that lasted only, what, a minute, then he was off, again, rushing to look at the orange peanut butter cup displays and touch all the shot glasses. FYI, if you ever buy anything like that in a candy store, wash the sh*t out of it cuz I guarantee it’s been touched by 10,000 little sticky, snotty, dirty fingers (and that’s just kid-fingers. Imagine what the adults have been touching!)

In the end, The-Youngest bought a pillow, a big bag of Jolly Ranchers, (assorted flavours) and got a free gigantic chocolate bar because, I think, he was so damn polite at the till.

That seemed to cheer him up. Nothing like free candy, right?

Then, we went to go outside. Into the bright sunshine. Into the heat.

Only to find it was raining.

Kim without make-up? Vegas without the sun? Are these things even possible?

I was super excited.

It’s not every day you get to see rain in Vegas. It’s kind of odd.  Like seeing a good Adam Sandler comedy or a Kardashian without make-up.

So, anyone have any idea what happens in Vegas when it rains?

Aquarius. Traveler. Gamer. Writer. A New Parent. 4 of these things are easy. One is not. But the journey is that much better for the new people in my life. A life I want to share with others, to help them, maybe, to make them feel less alone, sure, to connect with the greater world, absolutely.
View all posts by Joe Cummings →
This entry was posted in Travel, Vegas, Vegas and Grand Canyon and tagged candy store, coffee, hershey kisses, hershey store, howler monkey, humor, humour, jolly ranchers, kim kardassian, NY, NY NY, parenting, peanut butter cups, prettiest girl in the world, roller coaster, shot glasses, step-dad, stepdad, stepdaddy, stepdaddying, the oldest, the prettiest-girl-in-the-world, the village eatery, the youngest, travel writing, Traveling with children, Traveling with kids, vegas. Bookmark the permalink.