The Grand Canyon – It Doesn’t Disappoint

That’s it, boys, the Grand Canyon! That’s the Colorado River, you see down there. Kinda cool, huh?

This blog could be boring.

No one fell off a cliff. We didn’t get attacked by mountain lions or vultures. We didn’t have to hike out of the bottom of the canyon in 104-degree heat. We simply took an astonishing tour of the Grand Canyon’s Southern Rim.

If you don’t like reading about fantastic tours, I get it. It’s ok. You can skip this post. I won’t hold it against you. But if you are ever thinking of going to the Grand Canyon and want to know what one family experienced, then read on.

Let me do a plug for the tour company. Sadly, I’m not receiving any money for this, but maybe one day when I monetize my blog and have a million followers, I will sell out and give good reviews for massive compensation. But for now, it’s just the truth. 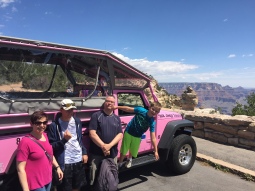 Pink Jeep Tours and our guide, Sean, were awesome.

The moment we arrived, they treated us so well. The guy at the counter knew we were coming. Knew we might be late. Congratulated us on making it and said we could still catch the 8:30, said we had a great tour ahead of us. Or we could wait for the next one. Whatever works for us.

We chose to go right away, but that kind of friendly is awesome. I’m sure he would have held my backpack and computer if I asked.

Now the Pink Jeep Tour only has, you know, jeeps. So, we had to share with two other people. Friendly people. From Cincinnati. A dad and his son doing the long drive home, seeing what they could see from LA back to Ohio.

Our guide was Sean. Tall. Thin. Long fingers. Young. Enthusiastic. The type of guy who actually seems to love what he doing and loves to talk about it even more.

Hard to fake that stuff. I know. I’ve tried. I can pretend to like Chopin for only so long before I start to fall asleep.

And off we went. 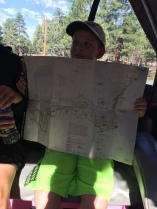 The-Youngest, being the cutest kid in the world, was designated by the guide as the official assistant guide and map holder. The guide told us the parts of the Grand Canyon we’d be seeing. Why we’d be seeing the best parts. What would be the stops we’d make.

At our first stop, we got out and, like the first time I saw the canyon so many years, ago, I was awe-struck. 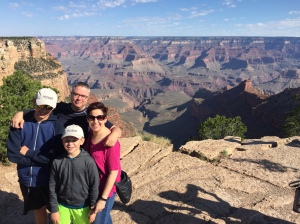 There aren’t any words to describe the canyon.

It is grand, for sure, but grand is such a small word for something so immense.

It is simply magnificent and, since I’m afraid of heights, not a little terrifying, with cliffs and no fences what would stop me from tripping and falling 6000 feet.

But looking at the layers of rock, at the colors, at the way the light and shadow made each formation, each outcropping, or landmark or feature utterly breathtaking made me realize how beautiful, beautiful can be.

Duck Rock. Or do you see the head of a sphinx? Or a monkey with a hat?

I loved hearing about the people who inhabited the nearly uninhabitable canyon. About how the canyon is unique in the world (it has a combination of deposits pushed up by the plate tectonics, then sheared and shaped by water and wind).

For The-Prettiest-Girl-In-the-World, it put all of the world’s petty problems in perspective. The world had remade itself so many times. Creatures lived and died and become part of the rock. We humans barely occupied the tiniest speck of time in the canyon. In earth’s history.

For The-Youngest, he didn’t care at all about the history or geology or the funny stories the guide told about his experiences with the canyon. He wanted to run around and get as close to the edge as he could. Personally, I think he just hated not having any attention on him, but his antics terrified The-Prettiest-Girl-In-the-World.

My worst nightmare is not falling off a cliff, though that is quite terrifying. No, it’s someone I love falling off.

So she held The-Youngest’s hand when she could, but not wanting to treat him like a 3-year-old, she tried to let him experience the canyon in his own way. But, in the end, I had to have a talk with him. Man-to-man. Face-to-face. No threats. I simply told him his mom couldn’t have fun and enjoy the canyon and the tour if she had to watch constantly out for him.

For the most part, it worked. Not because of what I said, but I think he didn’t really want to ruin his mom’s enjoyment. Plus the guide showed him how to take a picture that LOOKED like he was falling off a cliff.

Yes, it’s the Indian Watchtower at Desert View, a 70-foot-high stone building located on the South Rim of the Grand Canyon

We got to see the canyon from several vantage points, and at each point, it was different and incredible. We stopped at the very touristy tower, and while I’m not a big fan of touristy, we had fun climbing to the top of it, and taking in the view.  To be honest, though, while the Boyz ran to the top, by the time I got there, I was red-faced and breathing hard. Most of the other tourists looked at me like I was having a heart-attack.

But that was the worst that happened.

We simply had a great time seeing one of the world’s wonders, guided by the entertaining and enthusiastic, Sean.

Even if it makes for a terrible blog post.

Aquarius. Traveler. Gamer. Writer. A New Parent. 4 of these things are easy. One is not. But the journey is that much better for the new people in my life. A life I want to share with others, to help them, maybe, to make them feel less alone, sure, to connect with the greater world, absolutely.
View all posts by Joe Cummings →
This entry was posted in Stepdad, Vegas and Grand Canyon and tagged duck rock, grand canyon, humor, humour, parenting, pink jeep tours, prettiest girl in the world, south rim, step-dad, stepdad, stepdaddy, stepdaddying, the oldest, the prettiest-girl-in-the-world, the youngest, Traveling with children. Bookmark the permalink.