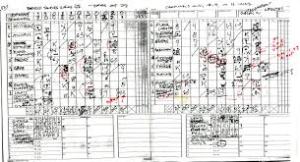 Mine had more scribblings and drawings of calvin and hobbs

Ok, so baseball’s officially over. The boys went out swinging, as they say. I survived scorekeeping and made only a few mistakes, though the whole ‘error’ thing completely eludes me still. I mean, take the last run scored in the last game. It was basically a hit followed by 11 errors, misthrows, overthrows and dropped catches. How to you record that in a 2”X2” square?

However, when I wasn’t scorekeeping, I kept my eyes and ears open for those great moments that make kids sports infinitely better than adult sports.

2. When The-Youngest ran into home, he forgot that he had to slide in. For some reason, sliding in is a rule. I don’t know why. But the coaches yelled at him to slide, slide, SLIDE, even though he was already standing on the plate, somewhat confused. He did what any major league player would have done while the infield desperately tried to get the ball to the catcher to tag him out. He knelt on the plate like he was praying to God. Or the umpire. (FYI, it worked, he was ruled safe.)

3. One infielder stopped a ground ball on the 1st-2nd base line and stepped aside with the ball in hand so that the runner could run by. No tag. No throw to 2nd. Or first. He was just being polite, I guess, a good Canadian who’d think it rude to actually get someone out.

4. If I was recording a game, here’s what a typical home run would be recorded as… one hit to outfield, the outfielder runs towards the infield for some reason, then realizes the ball is going way over his head, then runs back, then gets it and watches while one runner is nearly run over by another runner around 2nd base, and then the fielder throws it to first even though there’s no runner at first, and the first baseman misses it, causing the first runner to reach home and while the 1st baseman’s sauntering to get it, the rest of the runners are kind of confused and standing or running in circles, but then the first basemen gets the ball and throws it wildly to what can only be described as mid center field and the runners race to home while the shortstop rushes to get the ball, fumbles it, but ultimately throws it to the 2nd basemen who misses and the ball rolls to the pitcher who races to it as the last runner heads for home, and throws it, accurately, but the catcher is watching a drone fly overhead rather than catch the ball and the kid who hit the balls slides into home.

5. One kid hit himself in the face with his glove so hard he fell down.

6. One coach actually yelled, (I kid you not!) “there’s no crying in baseball!” Sadly, he was serious and not just ironically echoing League of Their Own.

7. Our third base coach grabbed a runner who began to run home and yanked him back to 3rd base. He felt so bad, as he just acted out instinct like any father seeing his son about to make a HUGE mistake.

8. At one point, in one game, there were 2 runners on second. The runner from first ran when there was a fly ball and didn’t stop even when it was caught. He reached 2nd only to find the 2nd base runner refusing to leave. So… what’s a runner to do??? What’s the 2nd baseman to do? They all kind of stared at each other while all the coaches and parents yelled advice. In the end, just to be safe, the 2nd baseman tagged everyone in a 10′ radius and let the umpires sort it all out.

9. There were many times a young fielder was just paralyzed by what to do with the ball once they got it. Like me when I’m at a fudge store – there are simply too many choices so you freeze up. Apparently, though, 20 parents shouting at them doesn’t help.

10. In one game, the other pitcher plugged one of our batters right on the elbow. You know that’s gotta hurt. The-Youngest ran out of the dugout and I thought, damn, what a good kid, he’s going to give the other kid some sympathy or be supportive, or do something empathetic. But no, he grabbed the bat from between the kid’s legs, cuz he was up next. 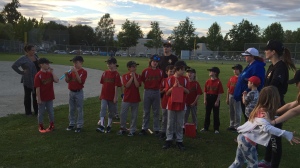 The-Youngest went from holding the bat like he was afraid it would independently hit him in the head, to becoming one of the team’s best batters.

Man, was I ever proud of that little guy. He was fierce when he went up to bat and swung like he wanted to bang it over a fence two fields away.

I can’t wait until next year, though I doubt I’ll be doing scorekeeping, again. I don’t have the attention span or mental discipline to keep thoughts out of my head like what to cook for supper, why did that little boy in the outfield just lie down and put a glove over his face, or wonder what just crawled up leg and into my crotch.

But mad props for all the parents who did kick in this year. Without the volunteer coaches, the dads who stepped up to coach first or third base, and the team moms who kept everyone informed, it could have been a nightmare.

Aquarius. Traveler. Gamer. Writer. A New Parent. 4 of these things are easy. One is not. But the journey is that much better for the new people in my life. A life I want to share with others, to help them, maybe, to make them feel less alone, sure, to connect with the greater world, absolutely.
View all posts by Joe Cummings →
This entry was posted in Baseball, Parenting and tagged Baseball, david ortiz, first base, home plate, parenting, scorekeeping, second base, sliding, step-dad, stepdad, stepdaddy, stepdaddying, the youngest. Bookmark the permalink.