Is It Ok To Be Wrong?

This is a first for me. I got something wrong.

Ok, not quite a ‘first’, but it was the first time that I managed to get something completely wrong while talking to the boys.

I guess it was bound to happen at some point, you know, you think the battle of Waterloo was in August when everyone knows it was June 18th or like when you mix up Elizabeth Banks for Chelsea Handler (though I still think they may be the same person).

But while driving to Toys R Us, The Youngest was all keen on buying a Nerf gun. Now, for those of you who haven’t been in a Toys R Us for years, or espouse a kinder, gentler, gun-free upbringing, then you may not know that Nerf has gone crazy with its guns. 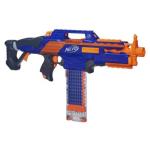 To be fair, he knew his weapon. It was accurate. It had a clip that held about a billion little Nerf bullets that get lost underneath the furniture. It had a telescoping stock. And it was huge.

In the world of kids, (ok in the world of guys, HUGE matters). I mean, who wants a little gun when you can have one half your size?

Which leads us, in a very shaggy-dog-story type way to where I went so wrong.

So here is the conversation in the car.

“So, Joe, did you know that you can buy all sorts of modulus for the Nerf guns, like a laser sight and a chainsaw and there was this guy who had like a hundred moduluses on his gun so he had like twenty grips and five scopes and three barrels that you could join together to make one long barrel.”

“Yeah. Did you know that Nerf has many moduluses for all their guns, now?”

“No. Modules are things that you, like, add ons to other stuff.”

“Oh. Modules. So, Joe, did you know that there’s a module that looks like two clips when it’s really one and when you shoot all the bullets from one of them, you just flip it over and put in the next one?”

But here’s the thing. When we got to Toys R Us, what did the stupid Nerf guns call their add-ons guns?

I looked at the Youngest.

He was too busy staring at the impressive CS-18, his eyes slightly glazed over, his mouth slightly open.

I could have let it be.

I mean, in one sense, I was right, right?

Modules? Noun. They’re totally a set of standardized parts or independent units that can be used to construct a more complex structure, such as an item of furniture or a building or nerf gun. That pretty much described what we were talking about. 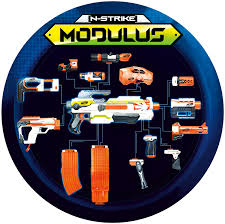 But instead, I told him he was right, and I was wrong. Nerf called their modules MODULUS accessories.

Not that he cared. He just wanted to show me all the parts he could use on his Modulus gun.

Now, I honestly don’t know if the parts are called moduluses, but what the hell, they may just be. Who knows? I’m still trying to wrap my head around ‘derp’ or ‘suss’.

In the end, grown-up or not, I think it’s important to own up when you’re wrong. I was wrong that the Seahawks would throw on their last down inches away from the goal line with one of the best running backs ever to play the game. I was wrong that Y2K would destroy the world (I still have cans of spam from that one.) And I was wrong to buy an upgunned laptop for gaming when all I really do on it is write and surf for pictures of bikini-clad Sandra Bullock.

So I think it’s ok that I admit I goofed it up. Even to an 8 year old.

What about you? Have you ever had to admit you’re wrong to a child?

Aquarius. Traveler. Gamer. Writer. A New Parent. 4 of these things are easy. One is not. But the journey is that much better for the new people in my life. A life I want to share with others, to help them, maybe, to make them feel less alone, sure, to connect with the greater world, absolutely.
View all posts by Joe Cummings →
This entry was posted in Parenting, Stepdad and tagged being right, being wrong, cs 18, lightweight Rapidstrike CS-18 blaster., modulus, nerf, nerf gun, Nerf N-strike Elite, nerf zombie, parenting, step-dad, stepdad, stepdaddy, stepdaddying, streamlined, the youngest. Bookmark the permalink.

1 Response to Is It Ok To Be Wrong?