The Great Camping Trip of 2015

Ok, let’s be clear. It wasn’t really hard-core camping. We weren’t going to have to sleep in tents. We didn’t have to hunt squirrels and cook them on an open fire with sticks. We didn’t have to poop in the woods and wipe our butts with palm leaves or whatever grows in our rainforests.

Nope, we would have a trailer, an outhouse, and cooking equipment that Gordon Ramsey would be proud to use. 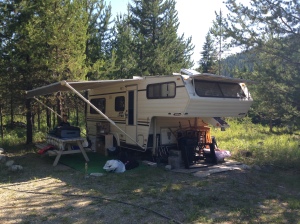 We even had internet and electricity.

But we wouldn’t be sleeping in our own beds, we wouldn’t have a Timmies 10min away and we’d have to shower in soft, well water.

The boys were about as keen as if we were going to darkest Thailand and living in a cave. The only bright spot was that they would see their grandparents. Me? I worried that it would be too hot to sleep at night. The Prettiest-girl-in-the-world dreaded that she would have to shower in a space about the size of our fridge.

Still, getting out of the house, going on an adventure, challenging ourselves in small ways… that’s what summer is about, right?

So we loaded up the car with everyone, the dog, food, clothes, and everything we would need, including a backpack full of electronics, cords, chargers and game players. God knows what the boys and I would have done without those!!! Read books? Go for walks? Look at sunsets? Bah!

Then we took to the highways.

We tend to forget what amazing things these roadways are, what incredible feats of engineering. We simply drive on them, complain about the asshat in front of us doing 70kph on a 100kph stretch, and wonder why they hadn’t put a Timmies on the summit of the Coquihalla. I mean, what the hell, right?

Luckily for everyone, I couldn’t download the Sound of Music in time, so they didn’t have to sing with me for 5 hours. OOooh, the hills are aliiiiiiiive, with the sooooound of muuuusic, lah, lah, lah, laaaaaah.

Instead, they played games, largely silent, and we adults got to look at the world around us in peace.

I know I’ve written about how to do a long trip somewhere, but I’m not ashamed to say that to save our sanity, having the boys plugged in while we drive is not such a bad idea. We tried listening to an audio novel the last time we made this trip, but that got me all sleepy as the road disappeared and I entered the faerie world of Artemus Foul.

Fun to do, but not such a good idea while driving.

But with the boys playing games, the adults could talk about serious adult things. You know, like how did Chris Pratt ever became a leading man? Or what stage of rehab was Johnny Depp in? Or who was that guy in the movie with the girl, you know, the one with the bad buy in that city?

In the end, the drive went off without a hitch. We bought Wendy’s food in Chilliwack, and spilt only a minimum amount on ourselves. We stopped at the summit so the dog could go pee, managed not to lose the dog in the forest, then switched drivers in Merit so I could snooze and dream of faeries, and we successfully navigated downtown Kelowna, which was crazy busy.

We arrived at the campsite well-rested, well-fed and well-peed, but too late to really do anything.

But we had big plans for the next day.

Aquarius. Traveler. Gamer. Writer. A New Parent. 4 of these things are easy. One is not. But the journey is that much better for the new people in my life. A life I want to share with others, to help them, maybe, to make them feel less alone, sure, to connect with the greater world, absolutely.
View all posts by Joe Cummings →
This entry was posted in Blogging, Parenting, Stepdad, Travel, writing and tagged artemus foul, camping, chris pratt, family vacation, humor, humour, johnny depp, prettiest girl in the world, step-dad, stepdad, stepdaddy, stepdaddying, the oldest, the prettiest-girl-in-the-world, the youngest, tim hortons, Traveling with children, Traveling with kids. Bookmark the permalink.

2 Responses to The Great Camping Trip of 2015