Ok, spoiler alert. We had Santa visit our house. I know some people don’t believe in Santa, but he’s alive and well and somehow managed to stuff his fat ass down our gas fireplace chimney.

The Youngest had tracked him as he passed over China, but feel asleep as old St Nick crossed the Pacific.

However, the Youngest had prepared for Santa’s arrival. He’d chosen the cookies himself, telling us that Santa did not much care for double stuffed oreos, but preferred shortbread cookies instead. Apparently short bread WITH maraschino cherries was his most favourite Favourite! cookie of all time.

The Youngest had also thought about the reindeer. Clearly they would be hungry, too (after such a long journey) so he hauled out a couple of handfuls of carrots for them, and then added a small bowl of dip cuz who really likes carrots without dip. Then milk was lovingly poured into a glass, and all of it was set up for Santa.

The only problem was, he’d set it up on the floor, right in front of the fireplace.

The dog thought Christmas had come early. She wandered by, took a double-take like she’d won the lottery and then snatched a carrot before anyone could stop her.

The Youngest scolded the dog for stealing from Santa and put the plate on the table. Then he went to bed, so excited about what Santa would bring him. Hell, he’d made a list just in case Santa hadn’t been paying attention – A list 4 pages long so Santa would have lots of choices, or, if Santa really, really, really wanted, he could get the Youngest EVERYTHING on the list. 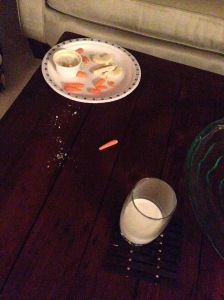 But here’s the weird thing. We learned Santa’s a bit of a slob. When he ate the cookies, he ate only the yummy maraschino cherry center, left cookie crumbs everywhere and stuffed half of the carrots for this reindeer in the dip without eating them.

In some places, he’d be considered a bit of a douche.

But he was the hero of our house.

I know this might be the last year that Santa lives. Sooner or later, he’ll fade to myth. But this year was made special because, when morning came, the Youngest raced downstairs, shrieked in glee that Santa had come and couldn’t wait to see if Santa had got him EVERYTHING on the list.

I don’t believe in anything anymore with that passion. Not God. Not government. Not that GRR Martin won’t, in time, kill off every single character in Game of Thrones.

But the Youngest still does. He danced when he found Santa had given him musical candy. He raced around showing everyone that Santa had given him the latest Pokemon game, and (much to my surprise), actually hopped up and down with joy over getting his favourite underwear.

When I asked how Santa knew about the underwear, (it wasn’t on the Youngest’s list), he shook his head like someone about to talk to someone really stupid, and told me Santa knows everything.

But it was such a beautiful and wonderful thing to be a part of that magical time, when imagination and belief are more powerful than reality, where a jolly fat man, not me, can make him so happy.

It made it such a merry Christmas for me.

It was a gift I hadn’t ask for either.

Aquarius. Traveler. Gamer. Writer. A New Parent. 4 of these things are easy. One is not. But the journey is that much better for the new people in my life. A life I want to share with others, to help them, maybe, to make them feel less alone, sure, to connect with the greater world, absolutely.
View all posts by Joe Cummings →
This entry was posted in Blogging, Parenting, Stepdad, writing and tagged christmas gifts, christmas lists, christmas presents, humor, humour, parenting, pokemon, santa, the oldest, the youngest. Bookmark the permalink.