It was morning. Balboa Park. Our last great adventure in San Diego.

We were off to see two of the best museums ever! One was a model train museum. One was a museum, I kid you not, that had sharks, dinosaurs and freaking pirates.

How could this fail? 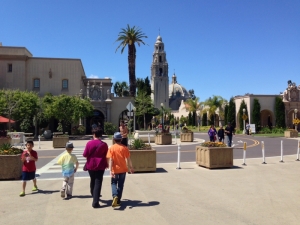 When we arrived, the sun was out. It was almost hot. The park was full of people, including a group of Chinese protestors protesting something bad China had done (which could be a whole ton of things.) There was an organ recital planned for later in the afternoon. Popcorn was being popped. The smell of hot dogs and onions filled the air.

It looked to be a great day.

But the boys didn’t take to the first museum.  Nope.  Not at all.

The oldest simply didn’t seem to care for all the models, not even when we found out that many of the dioramas built were completely to scale and were accurate representations of actual towns and times.

The youngest seemed keen at first. Until he learned he couldn’t actually go and play with the trains. It was the last straw, I think. Not playing with the lions had been a pretty big blow to him, but not being able to race the trains off the tracks and have them smash into buildings and people, well, that was too much.

Worse, he found out he couldn’t even touch the trains and no one was going to give him a free one.

So, for him, even when he got to press a button that made a small kiddie train filled with Mario brother figures go whoo-whoo, he was happy when we moved on.

For the Prettiest-girl-in-the-world, I think looking at the all work that went into making some of the amazing model train sets was pretty impressive, but she would have rather done something a little more interesting. Like poking herself in the eye with a fork. Or watching paint dry while waiting on the phone for an actual person at Shaw Cable to talk to her.

Now, I’m not a train guy. I played with model trains when I was younger and both my brother and I made some pretty extensive tracks. N gauge in case anyone cares or knows what that is. But the running of the trains on the tracks never had much appeal to me. The appeal was in creating worlds, making mountains, putting little shoppers next to little shops, finding the perfect stop-sign for a road crossing, and building a magnificent tree from sticks, glue and moss we pulled off of rocks.

So, to see what really talented people could create was simply a wow moment. Forget the whales that could leap over each other or the dolphins that would write Shakespeare, this was truly cool stuff. The hours and hours and hours each set must have taken was mind blowing.

It’s why I liked the lego store. It’s why I still like to make models (or did when I had free time.) I love that you could build something from nothing. Maybe it’s why I write. Same thing. From nothing, something cool. I’m sure there’s a latin phrase for that.

The buildings were perfect, the mountains soared, the hill rolled with grass. I found little mountain climbers on one set, stuck half way up, I found a dog being chased by his owner in a field. I found a car accident where people had stopped to render aid. I found a man putting up a store closed sign.

I hunted for those little ‘easter eggs’ like a little kid.

But for everyone else, it wasn’t quite the same thrill.

So we left and had a lunch of hot dogs. I could even eat one without my teeth hurting like mad. It made my day. The youngest wanted to eat 20. He was full after one. The oldest wanted to know if we could get those exact hot dogs at home. They were that good.

But before we could head off to see a museum filled with sharks, dinos, and freaking pirates, we had to do something for the Prettiest-girl-in-the-world. She had been a saint while we lego’d or went on splashie rides or went all googlie-eyed over model trains. So, we went to the small amphitheater and sat in the shade and listened to an organ being organized. Ha. Get it. Organized.

The musician played beautifully, but there was only so much the boys could take. Sitting still, listening to music, letting the sun warm their skin, well, that is just not something they could not do for long.

So, we listened to one song, then had to head off.

Next stop, the most awesome museum in the world.

Aquarius. Traveler. Gamer. Writer. A New Parent. 4 of these things are easy. One is not. But the journey is that much better for the new people in my life. A life I want to share with others, to help them, maybe, to make them feel less alone, sure, to connect with the greater world, absolutely.
View all posts by Joe Cummings →
This entry was posted in Blogging, Parenting, San Diego, Travel, Traveling with kids, writing and tagged dioramas, lego, model train museum, model trains, organ music. Bookmark the permalink.