Breakfast of Champions and Super Heroes.

There was something odd in the sky today. Kinda round. Yellow-orange. Surrounded by blue sky. I think primitive cultures called it the sun. It was not something I have seen for a while in San Diego.

That made it a perfect day for Seaworld. 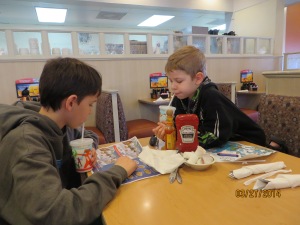 So we went to eat at IHOP.

It isn’t as easy to find a place to eat with the boys in tow. Or cheap. If there’s a place that offers kids eat free or kids will be made to wash dishes if they don’t eat what they order, then I’m so there. As it was, we thought the IHOP would be a safe bet.

done that at the other restaurants, but here it was easy to point on the menu while the waitress took notes. The loved the power. Soon they’ll be at starbucks ordering a drink, “grande skinny half soy, half skim, iced half mocha, half green tea, no ice, double whip, caramel topping in a ventii cup.”

One of the coolest things about eating here (or not, depending on your POV), was that they put a calorie count on all the food. Pancakes and sausages and 1 cup of syrup was like a billion calories. Who knew?

While we ate, the Prettiest-girl-in-the-world tried to arrange to meet a friend from her childhood, a friend that shared a fence with her for years, who knew her through good times and bad, a friend who she hadn’t seen again for a very long while (aka our spy).

Unfortunately, his family had been battling a cold and it was looking dicey that we would be able to all get together. However, today, it looked like he might get a free moment.

While she tried to connect with him, the boys and I worked on something vital to our existence.

What super powers did we have. Not which ones we wanted, which we had.

The youngest has the ability for his sleeve to find any spill on the table. Even spills he, himself, did not make.

The oldest has the ability hide all interest in all things. Every so often a smile creeps out, but it’s quickly covered up with a shrug even the French would be proud of.

The Prettiest-girl-in-the-world has the ability to look pretty even at 10am in a pancake house.

We came up with other ones like the youngest’s ability to snort milk out his nose if he giggles too much while drinking milk, to the oldest’s ability to be the fastest mouse clicker on the face of the planet.

However, the funniest moment of the morning was when the Prettiest-girl-in-the-world had looked up at me, with a bit of cheese hanging off her lower lip. Being me and being tragically flawed, I laughed. I mean, it looked funny. She still looked pretty, but it was funny.

“I have cheese hanging off my lip, don’t I?” she asked.

She glared at me. “Were you going to tell me?”

“After I finished giggling.”

“So you’d let me walk out with a giant cheese strand dangling from my lip?”

“No. At some point I would have stopped giggling and told you. It might have been in Seaworld though.”

She glared at me.

It looked like we weren’t going to be able to meet her friend, our spy, today.

No matter, it was going to be a great day.

How could it not?

Aquarius. Traveler. Gamer. Writer. A New Parent. 4 of these things are easy. One is not. But the journey is that much better for the new people in my life. A life I want to share with others, to help them, maybe, to make them feel less alone, sure, to connect with the greater world, absolutely.
View all posts by Joe Cummings →
This entry was posted in Blogging, Parenting, San Diego, Travel, Traveling with kids, writing and tagged #1rule, IHOP, pancakes, schmennis, starbucks, super powers. Bookmark the permalink.