Heading Towards Where Everything Is Awesome

Heading Towards Where Everything Is Awesome 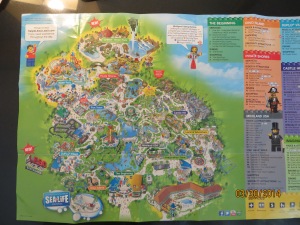 It was the goal of the whole trip. Legoland. So, first day, we geared up to see that wonderland.

We buttered ourselves from head to toe in sunscreen. We put on shorts and short sleeved shirts. We packed swim trunks. We were ready for the hot SoCal weather.

The sky was grey. A heavy grey. And surprisingly cold. Like Vancouver cold.

It didn’t really matter. The boys were excited. I was excited. We were going to legoland.

We hopped into our less-than-speedy Galant, and drove north. Along the way we spotted a shining Mormon temple impressively rising towards the sky, all white and full of pointy bits. The youngest said he was happy God made him alive.

I thought that was a pretty deep thought for early in the morning.

We discussed what heaven would be like. Apparently, according to the oldest, I can have a cloud island. Kinda cool. I told them I thought heaven would be where I’d meet everyone I’d ever loved and lost.

As we puttered along the highway, we played ‘what would you rather?’… to be able to read minds or predict the future? To be invisible or to fly? I love playing that game. I love hearing how the boys’ minds work. Would you rather be a lion or a tiger? Why? Would you rather be President Business or Batman? Oh, really?

We drove past two horse racing tracks. Past a lagoon of some sort. Over a lake that had no water whatsoever. Into valleys and beside great hills and ridges.

However, as we took the road to Legoland, the road called, wisely enough, Legoland rd, a bit of rain began to fall and it occured to us that we didn’t have any rain-gear or warm clothes with us.

Who needs such things in SoCal?

Was this a horrible start to what HAD to be the best day ever?

Aquarius. Traveler. Gamer. Writer. A New Parent. 4 of these things are easy. One is not. But the journey is that much better for the new people in my life. A life I want to share with others, to help them, maybe, to make them feel less alone, sure, to connect with the greater world, absolutely.
View all posts by Joe Cummings →
This entry was posted in Travel, Traveling with kids, writing and tagged Galant, lego movie, mormon temple, president business, prettiest girl in the world, rain in southern california, road to legoland. Bookmark the permalink.

8 Responses to Heading Towards Where Everything Is Awesome