Kids and Cars and Ghosts

While driving along the main street of Langley on Saturday, Alexander spotted a toy car shop.  Now cars are to boys his age like strippers will be when he’s 18 or a good snooze when he’s my age.  We had to promise to go back.

So, after breakfast/lunch at Dot’s Café, we crossed a street in a town where people still stop for you, and went inside C&R’s Hobbies and Collectables.  Alexander immediately found the packages of cars and began ogling them all while Mark checked out a HUGE radio controlled airplane, a WW2 Corsair.  I took Ana to the train area and we tried to spot all the doggies in a little display they had set up with collectable cars. 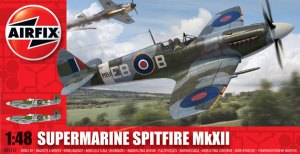 But there was so much more there.  So much from my past.  Testors paints that I used to use to paint my tanks and planes and little soldiers.  There was a Romulan Warbird plastic kit from my childhood, a few of the Airfix planes I’d put together, a couple of the tank and ship models and even a few boxes of toy soldiers I would save my paper route money for.

It was like I had been transported back in time.  So many good memories of times spent gluing models, painting them up, making little dioramas with them.  Some of my dioramas were even put in store window of my favourite hobby shop in Victoria.  As a kid, that was like winning an Oscar or gold medal (as least for a geeky kid like me.)

We didn’t buy anything but both Mark and I left talking about all the old models we’d built (and for some reason I can’t explain, I later set on fire.)

We were about to head to the Langley Airplane museum when Alexander heard fire truck sirens so off we charged to find the fire, or at least the trucks. 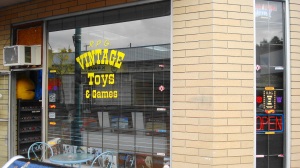 We never did find the truck but I we did find a classic deli, a tattoo parlor and RPG Vintage Toys and Games.

In we went and, just like C&R Hobbies, I was taken back into my childhood.  My teens to be specific.

There were old Nintendo games,

Intellivision games, shelves full of all sorts of board games, even one with plastic tanks that my brother and I used to play.  There were transformers boxes and Star Wars figures and even Bionic Man and Woman dolls (which I lamely tried to explain to Ana who just looked confused.)

But there was also something from a truly magical time in my life.  A time when I met my wife.  Way back in high school.  An unpainted box set of D&D miniatures.  Like the ones I bought when I first started to play the game.  A wizard and elf and dwarf and Halfling and a good half dozen others.  I’d painted mine up but there they were, all silvery and shiny and pure.

I left C&R all excited about my memories of being a kid. I left RPG Vintage Toys and Games just about as sad as I have been in a while.

The past, at least for me, is a double-edged sword.  There is happiness there, to be sure.  But also so much sadness and loss.   Somehow I managed to find both those things in two little stores in Langley.

Aquarius. Traveler. Gamer. Writer. A New Parent. 4 of these things are easy. One is not. But the journey is that much better for the new people in my life. A life I want to share with others, to help them, maybe, to make them feel less alone, sure, to connect with the greater world, absolutely.
View all posts by Joe Cummings →
This entry was posted in Parenting. Bookmark the permalink.

1 Response to Kids and Cars and Ghosts