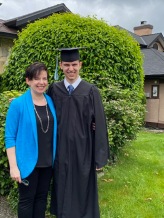 Yesterday, in a world kind of going nuts, we had a cool milestone.

I guess other parts of the world had milestones, too. In Seattle, there’s a new country. It’s called Chaz. You can get pizza there and plant gardens and smoke up. Sounds more like a frat house to me, but whatever, I think I want to make my own country now. I’ll call it Joe-ville, and everyone will be required to dress up as a hobbit.

In BC, you’ll see a lot more people dining on sidewalks or on bike paths so that we can open our restaurants. I think this is a great thing since I like eating outdoors, and a lot of restaurants have been hammered by this COVID crisis.

Locally, the big event for us was The-Oldest’s graduation. Sadly, due to social distancing, I couldn’t be there, and I won’t lie, that hurt a bit.

Not that I wasn’t invited, but they only allowed 2 parents to attend, one to be on stage and switch over the tassel, and one to take the pictures.

The-Oldest put on his best pants, his newest shoes, sported a new haircut, and even tied his own tie. Seriously, that last part was impressive. Then he donned his robe, figured out how to put on his hat, and sorted out the whole tassel thing.

He seemed… oddly unexcited. Not even nervous.

So let me relay the tale as best I can. When they arrived, the grad committee explained what would happen, that The-Oldest would have to give a GOOD hug for the picture, not some weird, awkward teenage boy hug, and smile, and stop fiddling with his tassel.

The-Oldest got to see his most favourite teacher, someone I will actually name since he’s helped The-Oldest a lot, his music teacher, Mr. Fawkes. Here.

To his credit, The-Oldest gave his mom a big hug, didn’t trip when he walked across the stage, and only mugged it up a little when it came time for pictures.

The-Prettiest-Girl-in-the-World held it together until the very end when he was heading out to his dad’s. He stopped, turned around, gave his mom a hug, and told her that he loved her. Not that usual, yah, love you too, I guess, but a deeply felt, I. Love. You. Thank you for getting me here.

At that point, I mean, who could not lose it?

So that milestone has now come and gone. He’ll be off to college soon, and his next big adventure will begin. Personally, I think he’ll LOVE the post high school education. He’ll be with people who love music with the same passion he does, who want to create and be creative, and who will likely think he’s a god (his words, not mine.)

Until the next blog, be safe, be healthy, and be respectful of this new world.

Aquarius. Traveler. Gamer. Writer. A New Parent. 4 of these things are easy. One is not. But the journey is that much better for the new people in my life. A life I want to share with others, to help them, maybe, to make them feel less alone, sure, to connect with the greater world, absolutely.
View all posts by Joe Cummings →
This entry was posted in Covid19, Parenting and tagged chinese corona virus, chinese virus, corona virus, coronavirus, Covid19, depression, fear, going crazy, graduation, history, humor, isolation, mitigating, pandemic, the oldest, the prettiest-girl-in-the-world, the youngest, the-prettiest-goldendoodle-in-the-world, vegas, writing. Bookmark the permalink.