Another First – A Concert

To quote The-prettiest-girl-in-the-world, last Saturday, we’d be ‘getting our culture on.”

The great pin-up of all time? But not the model I’m talking about.

See, The-Oldest has fallen in love. Not with a girl. No. Not yet, thank God.

And it’s not hip-hop or rap or alternative rock or whatever the hell Justin Bieber is doing these days. No, he’s fallen in love with classical music – and is busy learning to play it on our piano at home.

So we felt great joy when we found that the Vancouver symphony Orchestra offered up an evening of Mozart, Beethoven, some guy named Schnittke (which I thought was a totally made-up name) and someone called Valentyn Silvestrov (Who? What?)

Now, when I say ‘great joy’, I mean we were super excited to share this experience with The-Oldest. Honestly, I’m not sure any of us would have gone if it hadn’t been for him. For us, it would be like a colonoscopy only with more music.

Not that we hate classical music. It’s more like we just don’t get it on any deep level – and to truly love classical, I think you gotz to understandz it. On the surface, though, composers like Mozart or Beethoven are pretty likable for us noobies.

And the location, the Orpheum, was a beautiful venue. Not Vienna-Opera-House-beautiful, but elegant and kind of old-worldie.

Ode to Joy. At the Orpheum to watch the VSO

After we arrived, we went pee, then sat down. If there’s one thing I’ve learned, it’s get the boys peed. Especially The-Youngest. He was going to have a tough enough time not getting an attack of the wigglies for the 62 hours this concert would last.

Then the concert began.

I completely disliked the whole shnik–schittka-schnittke (whatever) Moz-art thing. Yuck. It was a mix of Hayden and Mozart and seemed to have managed to get the worst aspects of both. As my brother later said, “it’s an acquired taste” which basically means it’s terrible, but some people like it for some reason. Like cherry coke. 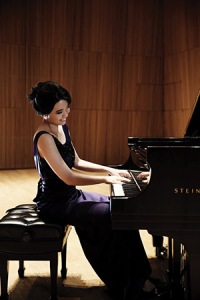 Was it the music or the woman, Joyce Yang?

But then the pianist, Joyce Yang, came on and boy, did she put on a show. I loved listening to how she still played with passion, even though she must have played that ‘like a billion times’ (to quote The-Oldest.)

But for The-Oldest… he was in heaven. He sat there listening with a look of rapture, the kind of look I know I had for a cute girl in the 7th grade who sat beside me. One desk up.

Now it could have been her. She was lovely, but honestly, I think it was the music for him.

At times The-Oldest closed his eyes, just listening, absorbing it, letting the music fill him. The closest I can come to that look is sitting in a hot tub after a hard work out. Or on the couch after a good turkey dinner.

He loved hearing Mozart, but being 13, he thought, “Mozart had a little too much repetition in his first movement.” Ha! Oh, the joy of being young and knowing it all (or at least being the eternal critic.)

Beethoven, he loved more. It was a complex piece. It started out all depressing, which I loved, but then moved on to be less somber and finally quite joyful. It was remarkable. The-Oldest tried his hardest to explain it to me, but this is all I heard.

It’s not like I don’t want to hear what he has to say. But I am a bear with a very little brain and all this new stuff hurts my head. Plus, by the time I was done, I was starving and some of the words got translated in my brain into food.

But it was a huge success. The-Oldest loved it. The-Youngest didn’t drive everyone around him nuts with a case of ants-in-the-pants and I, well, I didn’t fall asleep at any point.

And, you know what, that’s the coolest thing about being a new Stepdad. I get to do all sorts of things that I wouldn’t otherwise do.

This time, I even got my culture on.

Aquarius. Traveler. Gamer. Writer. A New Parent. 4 of these things are easy. One is not. But the journey is that much better for the new people in my life. A life I want to share with others, to help them, maybe, to make them feel less alone, sure, to connect with the greater world, absolutely.
View all posts by Joe Cummings →
This entry was posted in Band, Parenting, Piano and tagged bach, Beethoven, chopin, classical music, humor, humour, joyce yang, mozart, opera house, orpheum, parenting, schnittke, silvestrov, step-dad, stepdad, stepdaddy, stepdaddying, the oldest, the prettiest-girl-in-the-world, vancouver symphony orchestra, vienna, VSO. Bookmark the permalink.

2 Responses to Another First – A Concert