There are things from which nightmares are made of. Spooky clowns. Demonic, vomit-spewing children.  And kid’s birthday parties. Sometimes, all three at the same time.

So it was that I went with some concern, nay fear, to my first kid’s birthday party where I had to do more than just show up and look pretty.

For the party venue we’d chosen a rock wall climbing gym (and by ‘we’, I mean the birthday boy, our Youngest, soon to be age 8). His first suggestion was laser tag, but when he went to another boy’s party and saw how cool rock-wall climbing could be, that’s what HE had to do, too.

So we chose The Rock Wall in Maple Ridge. We knew it had to be good. It was rock and wall in the name.

In all honesty, we loved his choice.  It could have been way, way worse. Like we could have had a party at our house. I think I would have been committed to an insane asylum after that. Next on my nightmare list would have been a restaurant. I imagined trying to control 11 sugar-filled spawns of entropy when there was knives and cake to be thrown. Yikes! I got a twitch in my eye that won’t go away just thinking about that.

But rock-wall climbing would burn off tons of energy, right? They’d be all docile and ‘yes, sir, no sir,’ kids, right?

Well, I’d worked years at Toys R Us, so I knew that the only way 8 year olds are docile is if they’re asleep and even then… So, realistically, as long as they’re awake, they’re little bombs on energy.

However, I had an ace-in-the-hole. The Prettiest-girl-in-the-world had (obviously) done this before. Even better, she’d run events like this at McDonalds back in the day.

So this was not all on me. Not by a long shot.

But that didn’t alleviate the terror. Being a writer, I can always imagine the worst. A kid falls off the wall, the rope slips through the hands of the handler, splat. Or, the kids realize the power of numbers and gang up on the instructors, gagging and binding them, before setting fire to the place. Or a fight breaks out between the boys and they pull knives and dance to west-side story music.

Oh, it could be bad.

However, when everyone arrived, it was clear that some of the kids were scared to death. They had that pale, shifty look I get when I was called in for a tax audit. I think some of them imagined the worst as well. Maybe they’d seen Cliffhanger with Stalone? (Wait, hold on, only 6 people in the world saw that movie, so nevermind.) 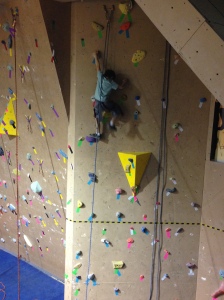 But here’s the thing, here’s what happened to both the boys and myself. As the night wore on, we both became more and more certain that things were going to be ok. You could see it in the boys who found the courage to climb to the top. You could see it in me when I put my phone away with 911 pre-dialed.

In the end, much to the detriment of this story, everything went fine. Oh sure there was the usual, ‘don’t stuff icing up your nose’, or ‘what are your shoes doing in the garbage?’ or ‘ok, has anyone seen my keys?’

But it was fun.

A part of that, for me, was letting kids be kids. The Prettiest-girl-in-the-world is so incredible at that. Like a little angel (the zen kind of angel you find on a christmas tree, not the avenging-angel-of-death kind.)

So it was ok that they dipped their pizza in sprite before eating it. It was ok if they didn’t sit down while eating (or kept to their assigned seat). It was s ok if they roared around on the mats, as long as the instructor remained in control. In fact, the instructors did a great job keeping the boys interested in climbing instead of trying to hang each other with the rope.

Everyone had a great time, at least I think so. A lot of the boys overcame their fear and that always feels great. They had pizza. Pop. Cupcakes. They laughed and joked with each other. None of them sat still for more than 12 seconds (I timed it) and the Prettiest-girl-in-the-world did an amazing job of keeping everything fun and organized (and all without shouting at them once!)

Plus…all of them went home. Alive and mostly uninjured.

I count that as a win.

Aquarius. Traveler. Gamer. Writer. A New Parent. 4 of these things are easy. One is not. But the journey is that much better for the new people in my life. A life I want to share with others, to help them, maybe, to make them feel less alone, sure, to connect with the greater world, absolutely.
View all posts by Joe Cummings →
This entry was posted in Blogging, Parenting, writing and tagged boys birthday party, cupcakes, humor, humour, pop, prettiest girl in the world, rock wall, rock wall climbing, stepdad, stepdaddy, stepdaddying, the oldest, the youngest. Bookmark the permalink.